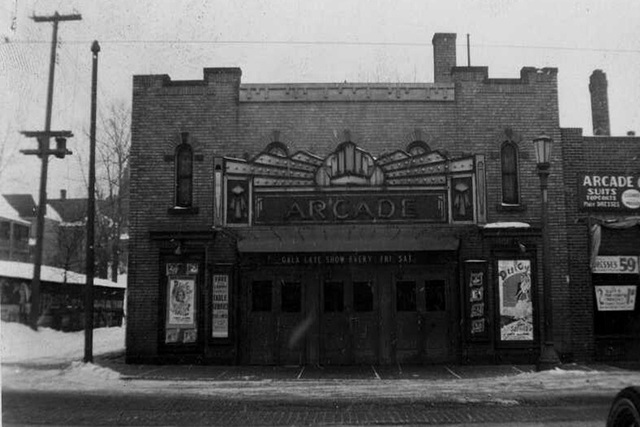 Strangely enough, I grow up not far from this theater. I recall one afternoon as a very young child being taken to it with my brother by our father. I still am in awe of the theater as I view it here, today. Somehow looking strangely that same as in did in when I was so young here.However, it also marked my memory with one of the most frightening experiences of watching a film in my youth to this very day! It was 1967 and the film of Bonnie & Clyde ( with Warren Beatty and Faye Dunaway) has just been released. I recall we attended a matinee, I believe it was Fall as everything on that street seemed dry and gray. I also remember we walked past a saloon at the corn with it’s door open and the smell of old beer lingering out. There was also a chill in the amber afternoon sunlight. I remember my old brother holding my hand and us all finding a seat near the back of the theater. The house was full. I don’t remember much of the movie, or maybe I just refused to, then, because was so horrifying to me. I do, however, recall the lobby and I’d like to say …there was a red-burgandy carpeting as you entered. I believe the chairs were velvet too and worn from use around the edges. I was born in the late 50’s so the idea of my dad & old brother thinking I could even understand this gangster movie is still beyond my belief. I not think I far from a legal age even to be entering, for sure. I remember as the movie unfolded I became increasing sick. The beauty of the theater vanished as I cried and begged to go during the film’s final bloodbath scene of them( Bonnie & Clyde) ambushed on a countryside road. My father and brother hurried me outside as the credits of the film began to roll. I vomited just below the marquee outside. I never returned to that theater but do recall my happier, earlier, experience at the Capital Theater located on Payne Avenue not far from this one. My grandmother took me. I have since, in my adult life, have come to rematch and like both those films of my youth plus recall the magic, class and style of vintage-built, almost forgotten movie houses.