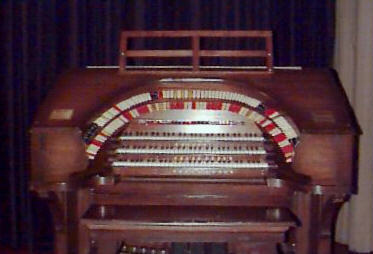 The Metropolitan had a Wurlitzer 235, Opus 1601 3/15 Theatre organ installed onm teh left side of the Orchestra Pit. It could rise to stage level and return to pit level in just few moments.

The organ is now house a the Houston Community College (San Jacinto Campus) Auditorium and currently in use.

The Theatre Organ is an evolutionary cousin (from the other side of the tracks) of the church pipe organ. Where the church or concert organ was designed and built to play liturgical music, or the music of classical composers such as Bach, Handel or the French romantic composers, the theatre organ was designed to play orchestral transcriptions of 19th century light classics and opera–which became the staple of many a silent film score. They could also play the popular music of the day without sounding “churchy”. These instruments were developed in the early ‘teens as an orchestral-surrogate, one-man band sort of thing to provide musical accompaniment to films, before they found their voice. The typical theatre organ has sets of pipes (“ranks” in organ speak) that directly seek to emulate orchestral sounds such as the trumpet, clarinet, flute, oboe, etc., and some that are closer in sound and origin to their legitimate cousin such as the string ranks, which don’t really sound like a violin, but are “stringy” in nature. The most prominent tone is a heavily vibrato flute sound called the “Tibia Clausa” a sound co-opted by electronic organ manufacturers and synonymous with the sound heard in the old soap operas when someone was having a really bad day. To this basis all manner of real percussions could be added, Xylophones, marimbas, glockenspiels, chimes, piano, as well as drums, tambourine, castanets, tom-toms, cymbals and gongs–all the real instrument, each note being struck with a mallet attached to a small remotely inflated bellows. All this was rounded out for the silent film “soundtrack” by the inclusion of real auto horns, sirens, bird whistles, locomotive whistles, and any other number of noisemakers. These assured this Rodney Dangerfield of the music world that the academic fraternity would never respect it.

Jesse Crawford at the console of the New York Paramount Wurlitzer. The showgirls on top are just one of many features that distinguish theatre organs from church organs. Listen to Jesse Crawford play the Miditzer Style 260SP: Click here

George Wright at the console of the South Pasadena Rialto Style 216 Wurlitzer, the prototype of the Miditzer. Listen as George Wright plays a sample on real Theatre Organ: Click Here

This is basically your first (orchestral surrogate) synthesizer, albeit one that weighs in at TONS and occupies many rooms in a commercial building. That was what they had to work with back then. There was no electronic (or electrical) amplification yet, and the best piano was powerless to fill a 2,000-seat theatre (but ample for a rural 200 seat theatre, as was actually the case) so the theatre pipe organ filled the needs of the silent film industry by allowing one man (= one musician’s salary) to play the accompaniment.

Oh, the larger houses downtown had orchestras that accompanied the pictures, but they also had organs (bigger ones!) that would augment the orchestra and relieve the orchestra, especially for the earlier shows. All of this came to an abrupt end when “talkies” came in, late in 1928-mid 1929. The organs and orchestras became unemployed, or reduced to accompany the vaudeville acts that preceded the movies. The time payments were ceased in some cases (that’s how the theatres bought them) and the manufacturer had to repossess their work.

These wonderful musical instruments sat unused in the nations movie houses throughout the latter 1930’s until the late 50’s-early 60’s, when small groups of enthusiasts began to approach theatre managers about voluntarily working on these slumbering beasts, to enjoy their music once again. The urban renewal trend saw many of these host theatres demolished, and some organ hobbyists bought these pipe organs and installed them into their homes. Few of the 4000 or so theatre organs exist today, in their original environment. It is special treat to today to sit in a darkened theatre and hear this rich, spectacular music.