Interior of the Metropolitan 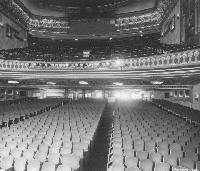 Constructed of plaster, the interior sound qualities were very refelctive making horns and other higher pitched instruments to have to toned down.

One could stand on the stage and speak in a normal tonw and be heard on the last row of the balcony.

The Booth was located 5 stories above the stage which required adjustment of the Mighty 90’s picture by using black trim curtains to make the Cinescope Screen rectangular.

There were 2 carbon arch spotlights that were so bright that standing on the stage in white light, you could not see your hand in front of your face.

The Cinemascope curtain was installed permanently, but there was a standard curtain fly frame which was used in the Vaudeville days.

In the movie. In Harm’s Way , you coul dhear the Japanese planes way in the distant right corner of the theatre gaining loudness and all at once, passing you and then bmbing on the screen,