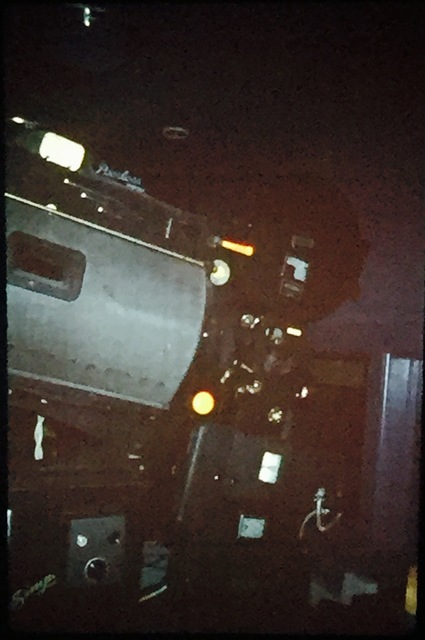 Here is one of the Broadmoor Little Theatre’s 2 original Simplex E-7 35mm projectors (with Peerless Magnarc carbon arc lamphouse). These were installed new in the late 1930s and were in use there until mid 1990s when they were retired and replaced with newer equipment*. The Broadmoor donated both complete projectors, a Simplex tube amp & soundsystem, Simplex booth monitor, Neumade rewind bench, Neumade reel cabinet, around 10 Goldberg Brothers 2k foot house reels and several other odds and ends to the Rialto Theatre in Loveland, Colorado which had, at that point, just recently reopened after a massive renovation and had no 35mm equipment of their own. I have also uploaded a photograph of the rewind bench and reel cabinet (next photo) at their new Rialto Theatre home. The Broadmoor’s electrician disconnected the projectors and Don Marriage, head projectionist at the Rialto at the time, dismantled them, moved all the donated gear up to Loveland and roughly installed them into the Rialto’s Booth. This slide, taken in the late 1990s, shows one of the two projectors fresh out of the Broadmoor’s booth (before any changes whatsoever had been made to it) and in its new home in the booth of the Rialto Theatre. They remained in this condition and sitting idle until the Rialto Theatre Guild raised the funds for the machines to be overhauled. This finally occurred sometime between 2000-2002 (my memory is foggy here) and primarily consisted of the machines being mounted on Xenon consoles, reverse-scan red readers (for optical sound) being installed, minor rewiring and new amps & soundsystem. This work and the final installation was performed by longtime cinema engineer Jimmy Seay and his son Phillip Seay of Denver. At least one of the original pedestals and carbon arc lamphouses were given to the collection of the Loveland Museum Gallery and is on permanent display.

*I am unaware of exactly the extent of the changes that occurred during the above mentioned mid-90s upgrade to the Broadmoor Little Theatre or if the changes/upgrades occurred in any other part of the theatre other than the projection booth.

PLEASE NOTE This photograph was NOT taken inside The Broadmoor Little Theatre. See above for details!