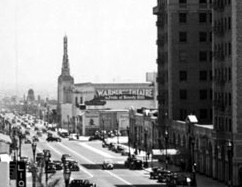 I was the house photographer for The Beverly Theatre during the wonderful period during the 80’s when Bob Stein, Jay Marciano, Steve, Liz Stinson…and too many more to name – worked hard to bring some legendary music to Beverly Hills. ( We used to call it “The Bev Zone”) I’ve been wanting to do a book or at least put together a history from the ten yrs I documented just about every performance (and repeats) and rental events…including Tina Turner’s “Be Good To Me” video…Bob Dylan rehearsing with Carlos Santana for their European Tour…Jerry Seinfeld opening for Dionne Warwick…and of course, watermelon man/genius “Gallagher” who returned several times to a sold out house! It’s heartbreaking seeing the photos of this beautiful theatre being torn down. What were they thinking?!? So…at least there are nearly ten yrs. worth of photos that could become a very special ‘time capsule.’ Would love to hear from my old gang. www.NancyClendaniel.com