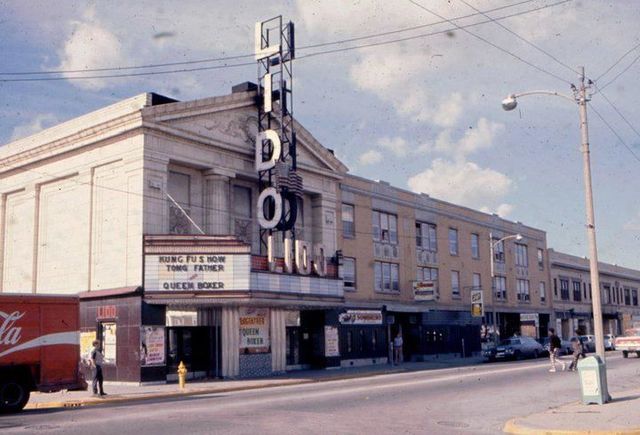 I grew up in Maywood in the 70s & 80s my step father was a Maywood cop, he did all kinds of side jobs, one was a board-up service. in the 70s I was in my teens and worked with my step father often. We were hired to board up the lido theater, I still remember being in awe of the interior as it was still amazing in the 70s even though it had been closed for years. I remember the screen & seats were slashed and alot of trash all over, but over all the place was still intact, there was a Huge chandelier in the lobby that was totally awesome, it had to be at least 12' across, me and my buddy were trying to find a way to snatch it because we both, even in our teens realized how really cool it was and it would be demolished with the building. My step father use to leave me and my buddy alone at these jobs to board them up, which left us full rain of the joints(way cool)! needless to say We went over that place with a fine tooth comb! The two 7 or 8' tall RCA move projectors were still there and in working condition, which we also wished we could have got them out as well, as they were going to be demolished with the building(unbelievable!!!). There was a large blood stain behind the movie screen, which my step father said someone was murdered there but I think he was just messing with us. The power was still on when we were there so you know we had to turn on the projectors and the decorative interior lights that back-lit the scenery and it was nothing but amazing!! That’s when my step father came back and said you can mess around all you want but what ever you do do not turn on the marquee lights(never knew why he didn’t want us too)but of course when he left that was the first thing we did and they actually worked including the large Lido sign, unbelievably cool!! people actually stop and asked if we were reopening the theater, I wish!! I will never forget that theater!! Other cool board-ups in Maywood we did were American Can Co. a Retired CTA bus drivers home on Washington st. which was way scary(sad love story)! The old A&P Supermarket on 5th that turned into a Disco in the 80s, we called it the A&P disco. White-way foods on 5th(building still there but falling down)crazy unique store! and what a name in a mostly black neighborhood! The photographer for the times who was a hermit on the third floor of the building next door to us(very cool story). Crazy stories at all these jobs!