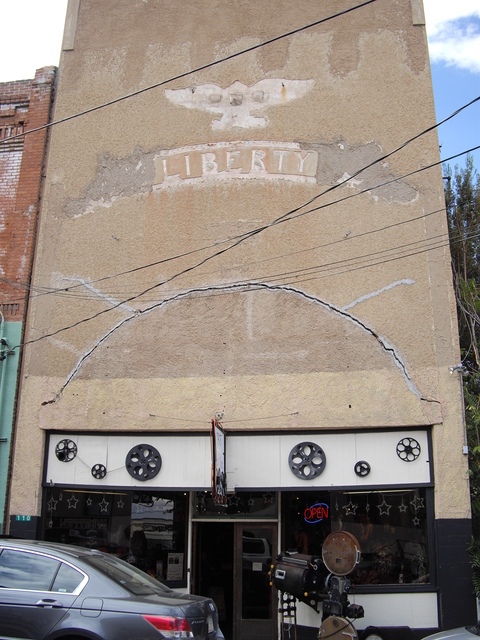 Front of Liberty on 9/6/11 Spoke with one of the owners about the theater on this date. He said that the theater was structurally intact. He said they bought old theater chairs from California to replace all the balcony seats.
He indicated that without the addition of a sprinkler system, they can not have more than 49 people in the balcony (fire code). At this point, they want to raise money for the sprinklers. They ask for a $2 donation to see the upper portion (balcony).
I specifically asked about the changes to the theater and if they had any original photos (they don’t).
The ticket booth was at the front and patrons would walk down the side of the building and come in the back entrance. It’s an unusual layout as the stage was at the front of the building and about 10' above street level. The owner indicated that the auditorium was never sloped and that patron all sat level on the floor looking up about 10' to the stage level. The balcony were the “cheap seats” (“for the miners” as he told me), though I would suspect it would have been much better to sit in the balcony as the lowest row of those seats would be level with the stage.
The stairwell at the front of the store leading to the lowest front edge of the balcony was added to meet fire code (according to the owner) as the balcony needed two ways to get out. The stairwell (from the highest point of the balcony) is quite tall.. and the steps (though covered in carpet) actually “wobble” under your weight. The projection booth was “off limits”, though I did snap a picture. This place is a fascinating theater.