The installation of CinemaScope at The Rialto Theatre Kew, Victoria Australia 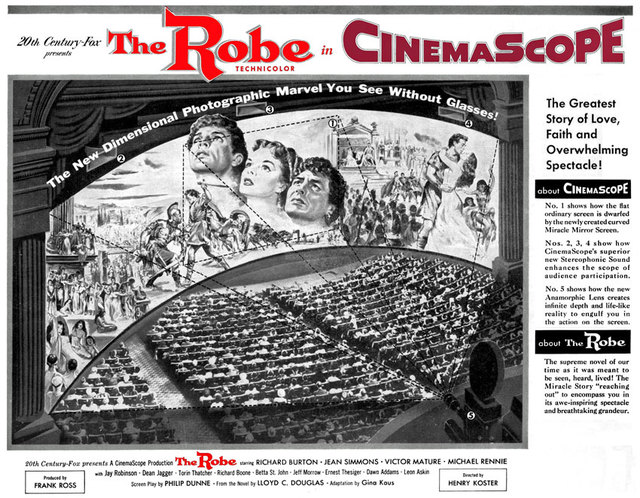 CINEMASCOPE – The installation of CinemaScope was an exciting time, not only for the public, but for the theatre staff as well. CinemaScope was big, everything about this format was supposed to be big. The Rialto Theatre was mechanically ventilated from behind ornate plaster grills, located on either side of the original proscenium. This meant that the width of the new screen was governed, or limited by the distance between the plaster ventilation grills. Still it was a big improvement on the long standing, almost square screen. Expectations were high as work began on this major innovation. A metal tubular frame was built across the face of the existing proscenium to lace up the new Miracle Mirror screen. Then black masking was installed to frame the screen top & bottom. As this was a new wide format, movable motorized black masking was installed to cater for all known screen widths. New brown, striped curtains were hung from the tubular frame, complete with a valance to hide the curtain track. CinemaScope & 4 track Stereophonic Sound began screening at The Rialto on Thurs, 9th Nov 1954 with “ The Robe ” which starred Richard Burton & Jean Simmons.

Trouble – Right from day one there was trouble with the stereophonic sound. To explain, there are three large speakers set up behind the screen (left, right & center) while additional speakers are located on the side walls, known as AP’s (Audience participation speakers) In the case of the Rialto, Hoyts had chosen to install RCA magnetic heads & sound rack. For the time this writer worked at The Rialto, the AP’s worked twice. Each time was a wonderful thrill. I became great friends with a technician named Arthur Lippee? who showed up on a regular basis in an effort to fix The Rialto’s rogue sound plant. Of course I’m speaking as a purist who lived behind the scenes. Truth is the public (hopefully) was probably never aware of any technical problems.

History tells us that the first CinemaScope release was 20th Century Fox’s “The Robe”, premiering Dec 31, 1953 at Hoyts Regent Theatre, Melbourne. Hoyts Theatres Ltd, managing director Ernest G. Turnbull had made advance newspaper announcements. To quote: “Instead of the limited, almost-square picture we know today, CinemaScope gives real-life perspective, on a curved screen, two and a half times the normal width. Special glasses or viewers are not required. ( The modern miracle you see without glasses ) CinemaScope’s dimensional depth is an illusion created by light on myriad’s of tiny mirrors embedded in the screen. Sound we are accustomed to hearing from a single amplifier set at the center of the screen, is recorded on 4 separate magnetic tracks at point of origin, and is distributed through speakers arranged behind the screen, and around the auditorium. The outlook for 1954 is very bright indeed, said Mr. Turnbull. Leaders of the motion picture industry see CinemaScope as the dawn of an entire new era in entertainment” – Contributed by Greg Lynch –

Thanks for the great CinemaScope® notes. I was always surprised by these first Fox CinemaScope® ads. You will never find the CinemaScope® Magic Mirror semi curved screen going that much into the first 15 rows like the drawing ad claimed It did. Many people seeing the advertisement were probably a little taken back. The Cinerama® people needed to take Fox to court to block this copy cat look as their curved screen did in most theatres come off the stage into the seat area with wrap a round curtains and way better stereophonic sound. Still It was the best thing for me as a kid to go to the Fox West Coast Paramount Theatre in Oakland Ca to see The Robe in 1953. They did a great job with showmanship and opened up the giant semi curved CinemaScope® screen curtains to a blue lighted screen and a recorded speaker came on to welcome everyone to the first showing of this magic wonder to the East Bay for the first time. Then they closed the curtains waited 2 minutes and then started the film with the opening. Great days for me and still too this day I can remember the seats we sat in on the middle left. The Paramount Theatre Oakland CA is still going but the drop down scope screen is way smaller then the original was. Thanks again Greg & film for the article.