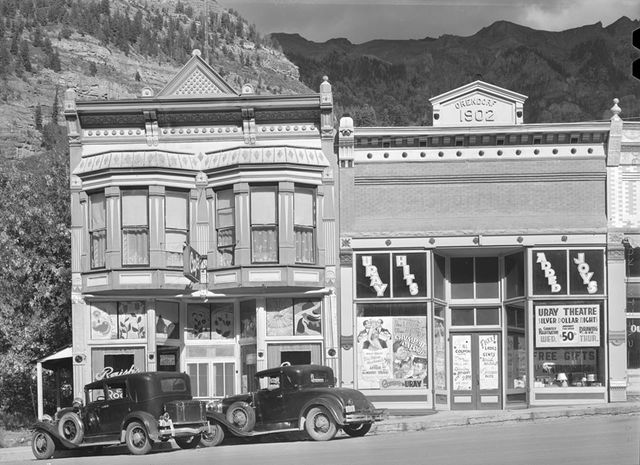 This photo of the Jeffers and the Orendorf buildings was taken in 1940 by Russell Lee for the Federal Farm Security Administration. FSA photographers recorded conditions in rural America during the Great Depression. The thousands of photographs they took are a great source of information for local historians today.

The lovely storefronts shown in this photograph are the Jeffers building on the left, originally built in 1890, and the Orendorf building with its 1902 construction date seen on the top. In 1940 the building on the left housed a café, and the shop on the right was empty, and posted advertisements for current and upcoming movies shown at the Uray Theatre, across the street at 624 Main. The movies advertised were “A Chump at Oxford” a 1940 release starring the popular comedy duo Stan Laurel and Oliver Hardy, and “Too Many Husbands” a 1940 romantic comedy starring Jean Arthur, Fred MacMurray, and Melvyn Douglas.

The town of Ouray boasts over a dozen facades, in a variety of styles, manufactured by Mesker Brothers Iron Works, more than any other community in Colorado, and an additional example by George Mesker. Mesker fans from all over the country travel to Ouray to view the Mesker brothers’ handiwork, and visitors from all over the world find the beautiful Victorian shopfronts one of the main attractions of one of Colorado’s loveliest towns.