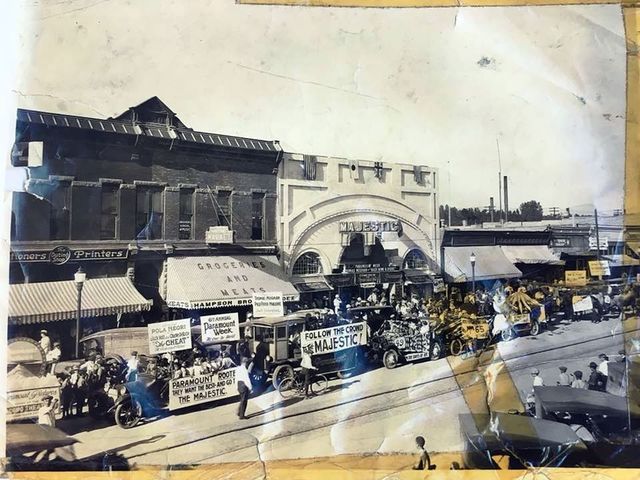 Like hundreds of theaters across the U.S., the Majestic Theater in Grand Junction took part in the annual Paramount Studios promotion “Paramount Week.” During the promotion, participating theaters would show the studio’s latest big budget releases over the course of a week, although that period was often extended by a week or more at the actual theaters. This photograph from 1923 depicts some of the hoopla in front of the Majestic for the sixth Paramount Week.

The Sixth Annual Paramount Week was scheduled officially to run from August 30th through September 4th, 1923. We don’t have a copy of the Majestic’s schedule, but the limited number of prints of each film meant that the showings would differ between theaters remarkably, both in date and content.

Still, there were plenty of movies to go around in an era when even the stars would be contractually required to make four or five films a year. The actress Pola Negri, for example, one of the bigger stars 1920s Hollywood, made five films in 1923. One of them, “The Cheat,” is advertised on one of the hand-painted signs being held by a passenger on the limousine near the head of the parade.

Just visible at the far left of the photo, the vehicle with the large Paramount logo was touring nationally as part of the promotion. It featured electric lights on the float and was built upon the chassis of a Willys-Knight car.

The Majestic Theater, remodelled from the existing Mesa Opera Rink by the Sturtevants in 1910, later became the Mesa Theater. It is a very popular music venue today."