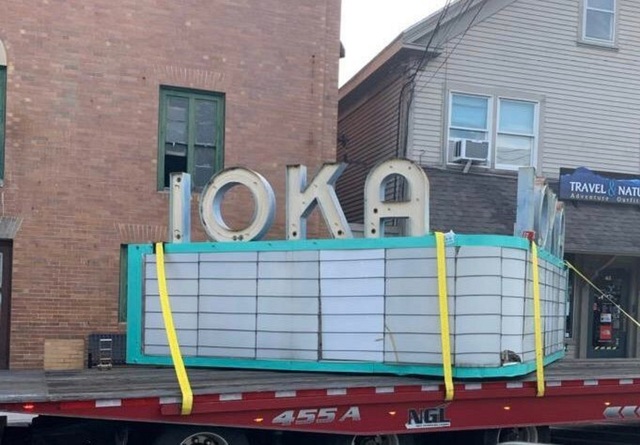 The former Ioka building in Exeter won’t have its marquee — at least for now.

EXETER — The former Ioka theater is looking bare these days after the iconic marquee was removed while the new owners work on renovations, but it may not return to the building if they win their fight to keep it off. The aging marquee was taken down last Friday after the town’s Historic District Commission (HDC) voted to allow its temporary removal at a meeting on Aug. 6. A potential legal battle is brewing over the marquee, which the HDC decided last month must remain despite objections from co-owners David Cowie and Jay Caswell, who purchased the property at 53 Water St. for $450,000 earlier this year under the name Ioka Properties LLC.

Cowie and Caswell plan to redevelop the vacant building to use for retail, residential condominiums, and a possible speakeasy-type restaurant. They wanted the marquee permanently removed because it would partially block the view from windows on the second floor and they have no use for it. They also estimated that restoring it could carry a price tag of more than $200,000. A majority of HDC members have argued that the marquee has historical significance and shouldn’t be taken down, but they voted unanimously at the Aug. 6 meeting to allow it to be removed and stored off-site during construction and restoration work at the building, which was originally constructed in 1915 for silent film and vaudeville. Sharon Cuddy Somers, an attorney who represents the Ioka owners, said they are appealing the HDC’s decision forcing them to keep the marquee with the town’s zoning board of adjustment. If the decision isn’t overturned, she said the case could end up in court.

Somers said the marquee would remain off the building during the appeals process and that it would be returned if the Ioka owners lose. HDC Chairman Patrick Gordon asked if there was any way to forgo the appeal process if the commission granted the temporary removal, but Somers said no. Many people have voiced support for keeping the marquee, but others have argued that it should be up to the new owners to decide what they want to do and that they shouldn’t be forced to keep something that won’t be used and will interfere with their project. Newmarket resident Laurie Couture, who once worked at the Ioka and has been outspoken in her support of preserving the marquee, urged the HDC not to allow it to be taken down on a temporary basis, insisting that the Ioka owners’ intention is to “do everything in their power to keep it off.” “Maybe attorneys will win, but you know what, this town does not know what it’s going to lose until it’s too late and I’m telling you that as somebody who lost my son. I’ve seen a million movies in my lifetime about what it’s like to lose a child. It’s never what you think,” she said.