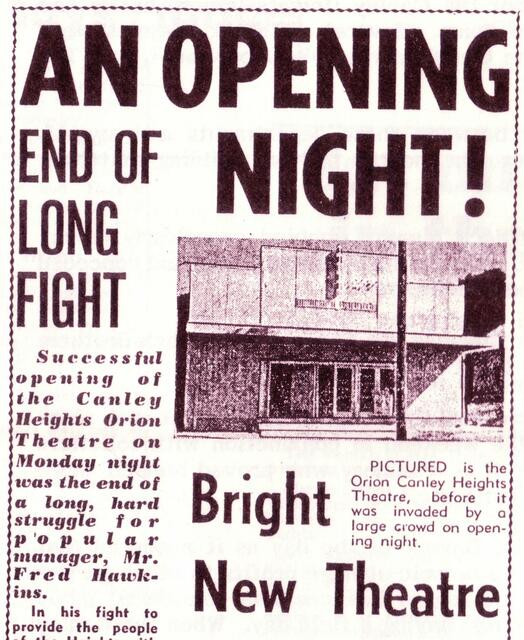 Located in Canley Heights to the west of Sydney. This is a story of endeavour, but more so, it’s the story of a mighty Picture Show Man. For what I am about to write I have one regret. I wish that Fred Hawkins was alive to read it. The application to build the Orion Theatre in Canley Heights had been submitted by Fred in 1946, following the end of World War II. There were several different enemies…The Department of Building Materials, The Chief Secretary’s Department & The Theatres & Films Commission. During this period two local members Mr. J.S. Freeman & Mr. Jack Mannix lobbied ceaselessly on his behalf, but it wasn’t until November 1955 that the Commission after exhausting all avenues threw up their hands and finally granted him a licence.

The victory was short lived when Suburban Cinemas P/L operating as Hoyts in nearby Fairfield, and the Madich Brothers (owners of the Cabramatta picture theatre) lodged an appeal against the licence. They asked the judge to reverse the approval, as the area was a semi-rural community with a population of 11,000 and did not need a theatre. They argued that existing theatres in the area were sufficient to fill its needs. A three day court case began in 1956 to hear the appeal. To Fred’s dismay their appeal was successful, however Judge Harvey Prior ruled that it had only succeeded only on a technical point. A further application was swiftly submitted and the licence was finally granted on February 15, 1957 to F.G. Hawkins of Cranley Vale, there-by ending a costly soul destroying eleven years battle. Judge Prior said that he sympathised with Hawkins as some existing theatre owners had adopted a dog in the manger attitude towards newcomers. For Fred, these words came from heaven, despite the introduction of television he would now go forward and build his own theatre.