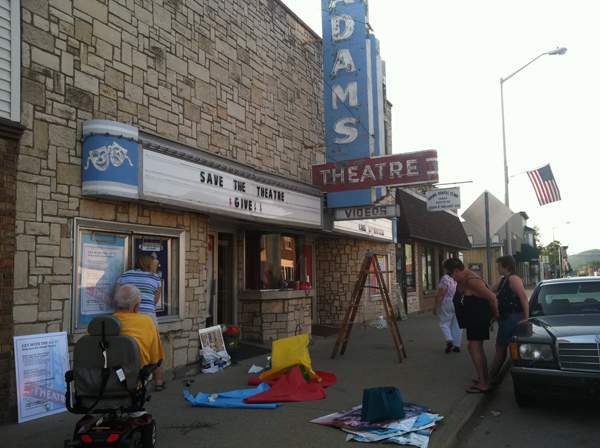 The Adams Community Theater Ltd. (A.C.T. Ltd.) is a nonprofit organization whose mission is to acquire, renovate and preserve the Adams Theatre built in 1946 at 157 South Main Street in Adams, Wisconsin.

The Adams Theatre closed in spring of 2011 and became a video store but has been purchased by the Adams Community Theatre group with Carla Byrnes as board president. The video-store operators had approached a community theater group in the area about purchasing the building. It decided it didn’t need the space, but the empty theater got the attention of some of its members. About 30 showed up for the first meeting of A.C.T. Ltd. and offered the owners $25,000 for the theater, which was accepted.

Fundraising exceeded expectations. With donations ranging from a few dollars to a $10,000 no-interest loan from an anonymous donor, the group raised more than $40,000. The roof needs to be replaced but otherwise the building is in good shape, Byrnes said. Byrnes envisions multiple uses for the theatre, which has a small stage. “We could do dramatic readings,” Byrnes said. “We have musicians in town who want to perform there. Some of our (local actors) are interested in doing workshops for kids on Saturdays.”

The School District also could use the space, said Sandy Pheiffer, a school employee. The three schools there are in constant use. “We have no dedicated space for the performing arts,” Pheiffer said. “We’re currently in production for ‘Beauty and the Beast’; we have to compete for use of the stage with our gym, (which always is) booked for sports.”

Byrnes said many residents collect classic films, and the building could be used as a venue to show the films. “I will be showing some of my personal films that are in the public” said Chuck Pheiffer. “Currently, we have the original (1946) projector that was put in the theater when it was new. We’re going to try and maintain the ability to show film prints when we can.”

Byrnes said the Adams Friendship Education Foundation plans to build an auditorium onto the high school in the next few years. “If we could be a stepping stone to that facility and offer a performing arts venue in downtown Adams, that’s what we’re hoping for. The City Council was thinking of the theater as an anchor of the downtown project,” Byrnes said. “Needless to say, we were thrilled since initially, we were trying to prevent having another empty storefront on Main Street.” The theater could draw other people to the area. “It’s terrifically exciting, and we do hope it will bring a resurgence for Main Street,” Sandy Pheiffer said.