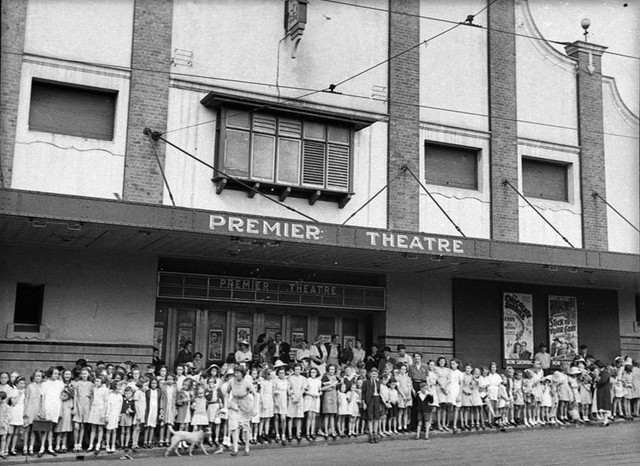 I was a frequent patron of The Premier Theatre from the late 1940s until about 1960 when the theatre closed with a re-release of Elizabeth Taylor’s NATIONAL VELVET as being one of the last films to be screened there. I do recall the night when the Premier’s 1,200 seats were packed to capacity for a screening of FROM HERE TO ETERNITY and when it converted to Cinemascope for HOW TO MARRY A MILLIONAIRE. In the mid-1950s the Premier had a first release screening of THE RESPECTABLE PROSTITUTE which at the time was a rather controversial event for a local suburban cinema. Some of the Premier’s biggest boxoffice receipts were gathered from screenings of ELEPHANT WALK, JOE MACBETH, LUST FOR GOLD, MAD ABOUT MEN, SLAUGHTER ON TENTH AVENUE, SHADOW ON THE WALL, EAST SIDE WEST SIDE, THE DESERT SONG, SAILOR OF THE KING and BEAU BRUMMELL among so many others. A double-bill was screened nightly on Saturday, Monday and Tuesday with another double-bill program change for Wednesday and Thursday and another program change for Friday. The nightly sessions commenced at 7.30pm, and Saturday matinees at 2pm. The Premier Theatre displayed daybill posters in the foyer to advertise the screenings of films and in its earlier days displayed one-sheet posters just outside on street level.

It would be interesting if a contributor could submit a photograph of the interior of The Premier Theatre and, also, if there is somebody who happens to know the title of the very first movie screened at The Premier when it opened in 1928.

In 1951, the Premier Theatre began screening films on Sunday which caused a political furore amongst imminent churchleaders. The theatre attracted more than 1,000 patrons for a Sunday screening of Vittorio De Sica’s SHOESHINE starring Franco Interlinghi which was profitable enough for the management to continue Sunday screenings. The theatre’s first-release screening of THE RESPECTABLE PROSTITUTE starring Barbara Laage was also a profitable manouvere although as a suburban cinema it was mainly committed to the screening of films after their initial opening in the city. On one occasion in the 1950s, the Premier also featured a live stage performance – featuring an Italian opera singer.