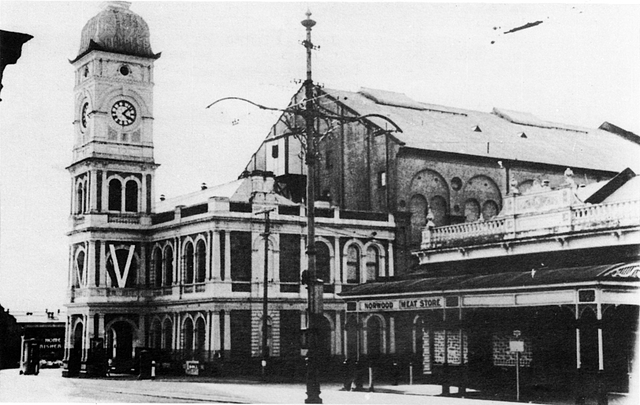 The large Vs on the first floor of the Town Hall clock tower signify that the 1939-45 war, in which Australia as an independent, fully self-governing, dominion of the British Empire had been engaged from the first day, was still in progress. I would have been between 13 and 15 years old, and would often walk with my Grandma the couple of hundred yards from her house opposite the Star to the Town Hall and climb the long flights of stairs to its very large balcony to watch films at its cheaper admission charges. The seemingly precarious bio box must have been stable, because the image on the screen was steady. For movies, no curtains graced the stage, though it had been designed for quite elaborate stage productions.

The butcher shop across George Street where the Hoyts Norwood Multiplex Cinema now stands, dated from the Victorian era, and still had the openable windows and hooks where a row of whole carcasses had been displayed in the heat, dust and flies as horse trams trundled by along the then unsealed street.