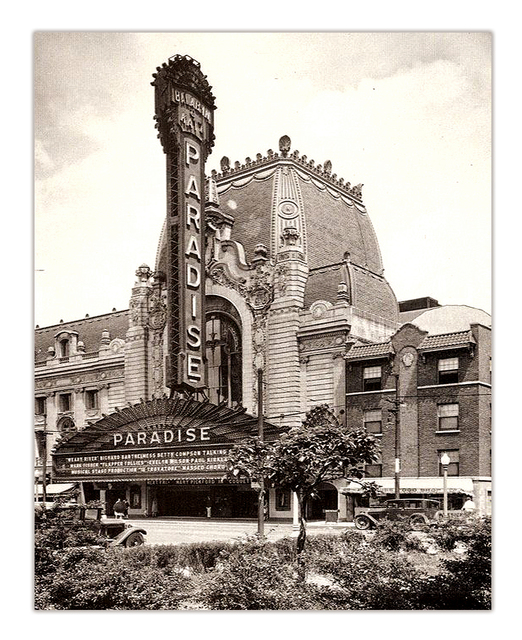 The film displayed on the marquee dates this photo to sometime in the Spring of 1929, since that is when “Weary River” was released. Supposedly the talkie version of this was released in February and the silent version in April. Though the marquee indicates it’s a talkie, the vegetation present pretty much rules out February in Chicago, so my quess is that it’s probably April or May 1929. There’s also a lower sign under the marquee that shows Mary Pickford in “Coquette”, which was released on March 30, 1929. But then again, who knows when these movies would have made it out to the neighborhoods.

The exterior of this famous “Paradise” was in the “Louis XVI” style- while the interiors of white marble(staircases, statues, etc.) was in a suggested “Roman Villa” style. No doubt it would have satisfied a “Louis” and his French court. High(very high)above the proscenium arch was a life-sized statue of “Apollo in his chariot”– driven by horses(among other numerous statues in white marble(or faux marble)thru out. The very high celling- painted like the evening sky with twinkling stars + clouds- unfortunately affected the acoustic quality of the “new” sound pictures of the time, to the point it became hard to hear the sound/dialog. People began to frequent a competitor’s theater nearby- which offered better sound acoustics. This was just the beginning of the Paradise’s decline.

The Paradise opened for business on Sept 14,1929. I know because my grandparents celebrated their wedding anniversary on that night. They never forgot that evening.

I grew up on West End Avenue in Chicago. The Paradise was just around the corner on what then known as Crawford Avenue. I moved away when I was about six. But until then often escaped to Paradise. I cried when I found out it was torn down, only a few years later.

I think the doors were never updated like the Marbro was in the 1940’s. I wonder why?