Willy Wonka and the Chocolate Factory opening at LENOX SQUARE 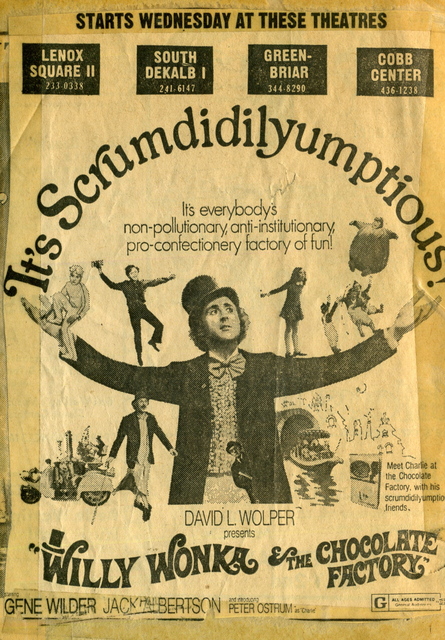 Photo: CLIFF CARSON. Willy Wonka was not the box office bomb that it’s reputation would insist. In fact, it opened at the NORTH DEKALB MALL theatre in Atlanta first and played there for a while before going wide. Lenox Square was one of the first theaters in the country to twin itself. The first theatre was a nice size, large in proportion with a big screen. Theatre no. 2 was unusually narrow and long in diameter with a rather small screen at the end. It was a make shift theatre with a couple of huge pillars near the back directly in the center of the theatre. Second and third run movies would play there. ALICE DOESN’T LIVE HERE ANYMORE opened in the no. 2 theatre. So did a lot of Russ Meyer films. Normally after a film had a popular run in the larger no. 1 theatre they would move it to no. 2.

Alice opened the same day as Lenny, 2/14/75. It did very well on its own, and even better from the overflow on the shows that Lenny sold out. A couple of times Lenox played the same movie in both houses with alternating show times, something common today but unheard of back then. As Cliff said, movies would sometimes move to #2 when still doing well when they had to leave the big house. Cliff is incorrect on another point. No Russ Meyer film ever ran here. I think that Midnight Cowboy was the only X to run at Lenox. They even passed on Last Tango In Paris.