Grange from the air about 1960 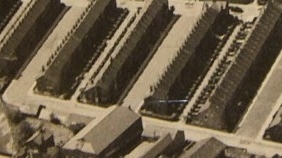 The building had tremendous height above the street at the rear. The screen horn was inside a large rectangular box on steel brackets fixed high up the middle of the end wall, presumably done when the cinema was rigged for talkies.

There was a vast hinterland of terraced housing from which the audience could come. However, the far better appointed Arcadian mini-super-cinema was not that far away in a direction following the line of the terraces, off the top right of the photo.