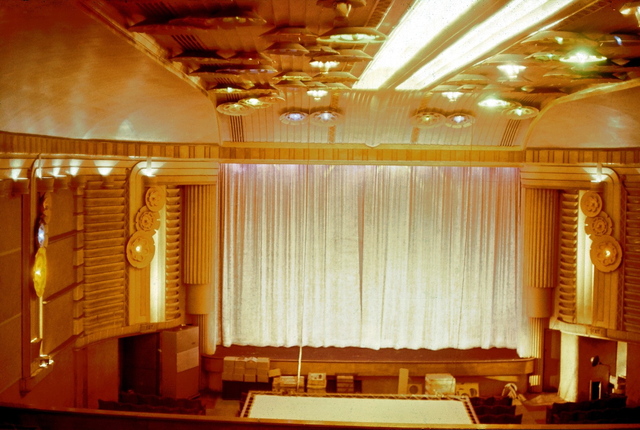 Built for Robert G. Ward and named after the pioneer land-owner of the Brighton area, this fine theatre became a Melbourne institution. Led by Robert F. Ward, it was arguably the pioneer of a policy of art film exhibition in Australia, some films running for a year or more and attracting patrons from all over the Melbourne metropolitan area. ‘Bert’ Ward assisted (gratis) the Victorian Theatre Organ Society to make a new home for the ex Capitol Wurlitzer, and instituted a policy of music and stage performance as an integral part of a cinema programme. This picture was taken while a new ToddAO screen was being installed, with Cinemeccanica Victoria 8 35/70 mm and Bauer IIO 16mm projectors. While this was happening, nightly 16mm surfing movie shows continued on a portable screen suspended in front of the balcony. I took this photo just before its erection. The projector was a transportable maltese cross Intermittent Bauer Selecton IIW with 6,000ft capacity which I still own.