Wide shot of main lobby for the Ultrastar Tower 10 theater 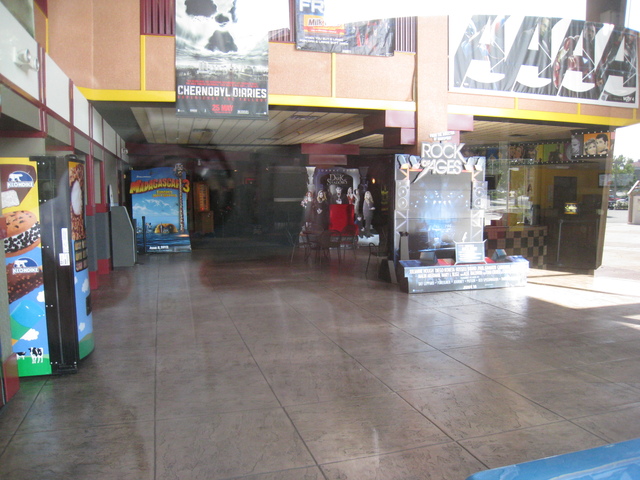 This picture was taken through the glass, so it’s not perfect, but you can still clearly see the lobby area. You can see an ice-cream vending machine and ATM on the left side. There is a “Madagascar 3: Europe’s Most Wanted” stand-up display, as well as a “Dark Shadows” stand-up display (it’s really cool, it has an actual red chair in front, so you can take a picture with the cardboard cut-out cast…I thought it was a great idea). You can also see the “Rock of Ages” stand-up display, which had a fake guitar with it, so you can take a pic of you rockin' out with it, again, I thought it was a cool idea. I love the interactive stand-up displays. In the background on the right you can see the concession stand/snack bar. And finally up on top you can see a poster/banner for “The Chernobyl Diaries” and “The Avengers”.