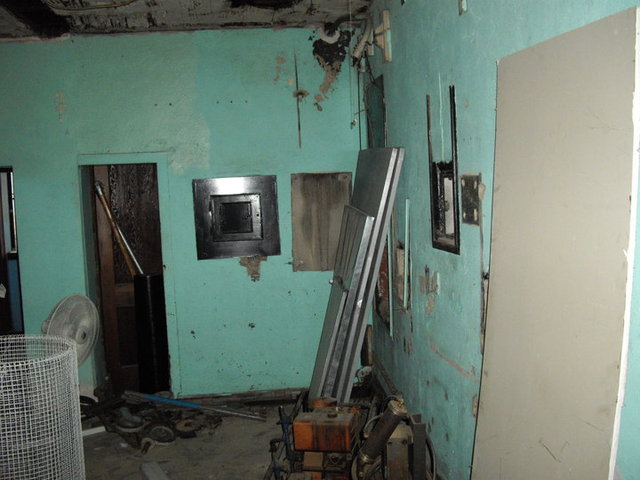 On the far left of this pic was the steel door entering the projection booth from the stairwell. The narrow door in the center led to a sink and toilet for the projectionist. The old fuse panel is to the right. Most of the concrete and chicken wire ceiling has fallen.

On the right wall you can see the openings to the auditorium where the projectors shot the image. The black one with vertical steel slots is higher because this is where the projectionist looked from to see the “cue dots” for the 20 minute reel changes.

All openings to the auditorium had those black steel grooved runners and a heavy black steel plate. That plate was tied to a chain in the top-center which went up to a horizontal pole running the length of the windows. In the old days of films being made with nitrate, it was necessary to shut those steel doors down over the openings in case the film caught fire (since the smoke from nitrate film produced a lethal gas. The room was concrete and the door made of heavy steel so any fire could be contained to the room without gas spilling into the auditorium in the event of fire. There was a fan draw-vent in the ceiling that led to the roof and a switch near the door. This would also be turned on as the projectionist left the room so help evacuate the gas.

I was the projectionist as a high school kid (senior year) in 1980 & 1981.. and this story was told to me by Bill (the full-time projectionist). By the way, all the film canisters were on the rear of the room (our of picture view on the left) at the time.. and Bill would keep Vodka and other alcohol in the unused canisters. :)