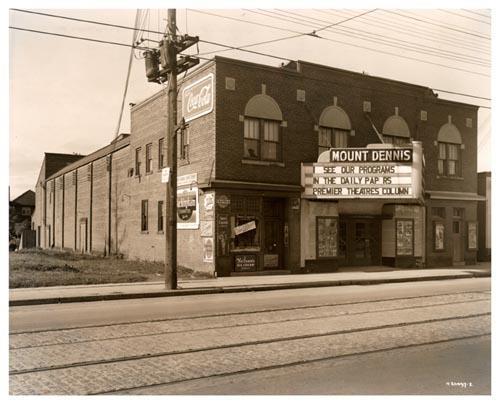 This is the 2nd Theatre in Mt Dennis.

We believe this is an early to mid 1940s picture because 1)Double street car tracks. 2)Electric street car lines still evident. (Line terminated and changed to trolley in late 1948. 3)No lights on marquee (Wartime rationing. 4) No great exspanse of front glass (it was added later). 5)Style of Buckingham Cigarette add on side of bldg. 6)No other buildings on left of theatre. 7)Bldg on right is built right to curb. Later (1950s) there was a gas station and later Kentucky Fried Chicken (1970s). Any other analysis would be helpful. (Mike Janet Wayne?).or anyone with other photos of visits to the theatre.

This photo is listed as 1944 on another site and quoted in this file. I just found another reference a few minutes ago. To search, put Mount Dennis Theatre in Google.