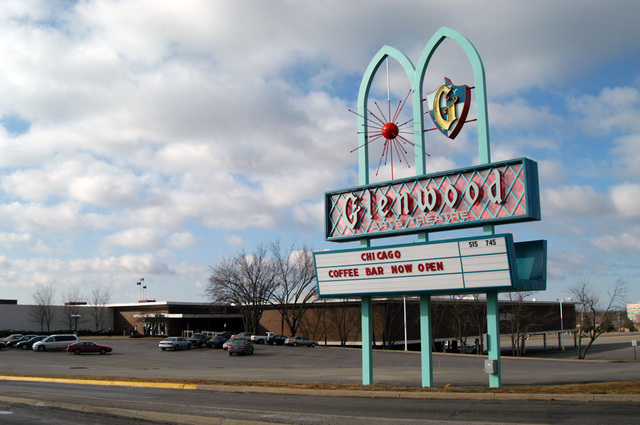 Glenwood Theatre behind the marquee before the building was demolished.

That’s the Metcalf South Shopping Center in the background, specifically the north end/Jone’s Store part of the mall. This was the marquee’s location after the Fine Arts Group bought, refurbished, and moved the sign to this location in 2002.

The Fine Arts Group’s Glenwood Arts Theatre, not affiliated with the original Dickinson’s Glenwood Theatre, closed this theatre Sunday, January 25, 2015 due to the eventual demolition of the mall thought to happen in late 2015.

This marquee was disassembled over 2 days on February 5th and 6th, 2015 and put in storage. As of the date of this posting, the marquee is rumored to eventually be refurbished with the lettering changed to “Englewood” and moved to the Englewood Station Arts District in Independence, Mo.