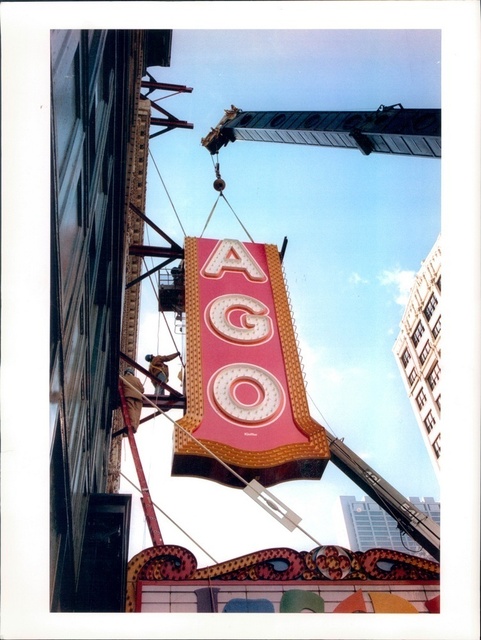 Sign Of The Times - State Street Is Losing Its Brightest Light, But Only For A Short While.

Aging stars don’t burn out–they get replaced. After 75 illuminating years, the towering Chicago Theatre sign, State Street’s brightest star and one of the city’s most recognizable landmarks, is coming down this week. The 76-foot-high steel sign, with 2,534 lights screaming “Chicago” for all to see, is corroded beyond repair and must be removed, said Chicago Theatre Executive Director Wendy Heimann-Nunes. “We are ensuring that the sign will look as it did when it was first put up,” he said. Theater officials discovered the sign’s deterioration during a routine inspection last March, after the Civic Preservation Foundation assumed management of the theater. The sign appeared fine on the outside, but 75 years of Chicago’s harsh weather had taken its toll on the inside. “It had to be close to falling, the steel was so rusted,” said Steve Kieffer, owner of Kieffer & Co., the Sheboygan, Wis., firm that is manufacturing the replica for $500,000. “If it was at all possible to keep the original, we would have done it,” said Heimann-Nunes. “But it would have cost us two to three times as much to repair than to replace.” So, how does one go about replicating a national landmark? Painstakingly, said Kieffer. Everything must be identical, from the seams between the metal pieces and obsolete maintenance ladders inside the top of the sign to intricate scrollwork. The entire project will take about 860 hours of work, he said. The sign will be made in Sheboygan, then shipped to the Kieffer firm’s Buffalo Grove office, where an installation team will take it to Chicago. The replica will be constructed from aluminum, which weighs about one-third less than the current steel sign and will ease stress on the building, Kieffer said. There will be a modern wiring system and “chaser” lights around the perimeter will be reconnected. “We’ve gone to the nth degree to replicate it,” Heimann-Nunes said. “I don’t think anybody will know the difference.”