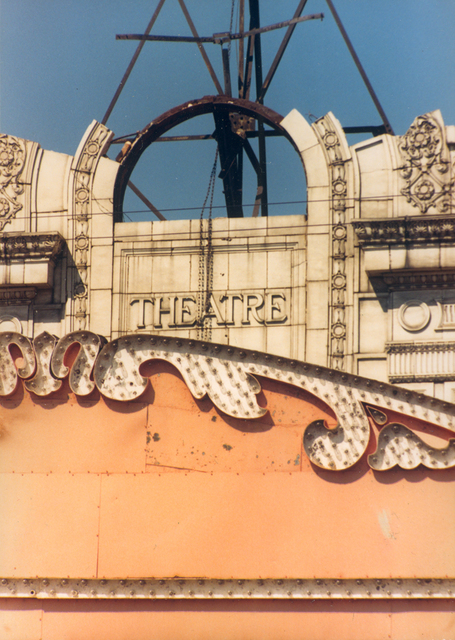 Help save my falling arches, the old Biltmore seems to cry out in the summer of 1989, as perhaps my favorite movie theater of all time entered it’s terminal phase.

This arch was one of the Biltmore’s defining features, and with most of the delicate terracotta work resting in pieces atop the marquee, it’s little wonder that preservationists were unable to find the capital for restoration.

Seeing those stabilizing chains draped over the front of the facade reminds me of walking past this theater with my father when I was about six years old, and asking him what that tower on the roof was for, as I pointed to the steel sign anchor in this picture.

As student at Tuley High in the early 1930’s, my dad could recall the large vertical sign that was suspended from the building’s roof in those days, and apparently removed sometime before or during World War II.

Sometime in the mid-1960’s, while visiting the old main library at Michigan and Randolph, I saw a beautiful photograph of the Biltmore taken during the 1930’s. It was a shot likely commissioned by Balaban & Katz that showed the theater in all it’s nightime glory, with the huge vertical neon and marquee illuminating the arch to full effect.

The photo was part of a collection on display at the library that showed photos of other landmark movie theaters in and around Chicago. Perhaps it was on loan from B&K, or in the library’s permanent collection. In any case, I hope those same photos still exist and will soon wind up being shown either here or elsewhere on the internet.