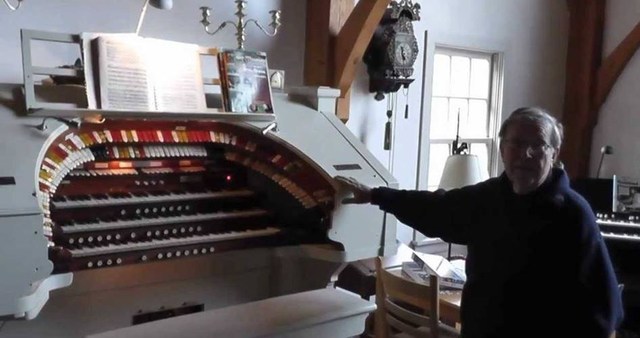 The Console shown here is now in a private home. This console originally came from the State Theatre at 52nd and Chestnut Street in Philadelphia where it controlled a 3/13 Kimball Theatre Organ. The organ was purchased by the late Jim Breneman, an organ enthusiast and tax accountant with Sun Oil Company. The State Theatre seated about 3,000 people and the organ itself was located 7 floors up above the proscenium arch. The organ was removed from the State and installed in the Brookline, where I played several concert programs on it. The Brookline was prone to flooding and after rebuilding the console several times, due to water damage, the organ was removed and relocated to the Colonial Theatre in Phoenixville, PA which Breneman purchased in order to have a safe home for the instrument. He subsequently left Sun Oil, went into the business of motion picture exhibitor, built an apartment in unused rehearsal space at the theatre and lived there until his untimely death in 1991 at age 46. I was house organist at the Colonial Theatre from 1979 until the Colonial Closed in 1995. The Console, pictured above, was replaced with a 4 manual English Walnut console in order to accommodate the instrument’s growth from the original 13 ranks (sets) or pipes to 34 ranks. Once we had the 4 manual console installed This console went to the Wanamaker store in Philadelphia where it was used to temporarily play the 6/463 Grand Court Organ while their console was being restored. It then went to a private residence where it currently plays an instrument closer to the size of the original State Theatre organ. The Colonial Organ was sold. The Colonial in Phoenixville has since reopened and has installed a 3 manual Wurlitzer organ which is used for concert programs and silent film accompaniment.

The “mighty Kimball” console shown here is now a part of an organ building project in Delaware. Spring 2018 is our projected “unveiling”.