Warner Movie theater as it looked when it was just completed 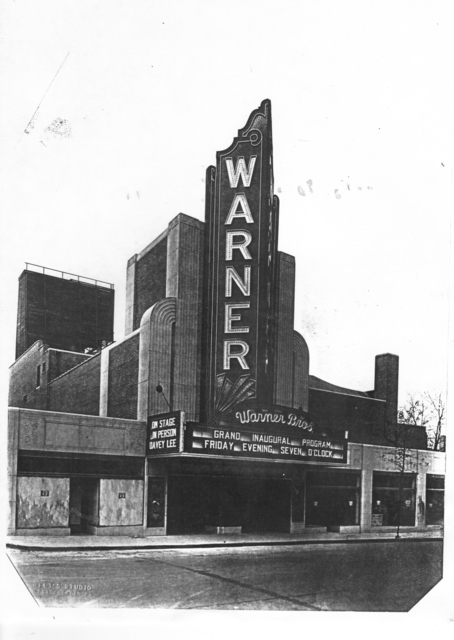 This report is based on a research paper submitted in partial fulfillment of the requirements of History 480 by Alishia M. Faller, “West Chester, PA or Westchester, NY: The Rumor of the Warner Theatre and the Opening” (April 18, 2004). It was edited and adapted for the web by Dr. Jim Jones.

The Warner Theatre, or the “showplace of Chester County”(1) opened its Art Deco doors to the West Chester community on November 14, 1930. With the emphasis on modernity and prosperity, the community had been anticipating such a grand theatre, “promising to fill a want long felt in this community, and to prove an attraction to those from far and near who are seeking the best in the way of entertainment” as described in a Daily Local News article published the day before the opening(2), during the second year of the Great Depression. This paper will trace a brief background of the theatre and attempt to explain the rumor about the grand theatre, and provide a small background of the motion picture industry to connect the national industry to West Chester.

For many years, a rumor has circulated in West Chester that the Warner Theatre was actually intended for Westchester, New York, and was built in West Chester by accident. This was thought to explain why such a grand theatre ended up in the relatively small borough of West Chester. When I found no sources in West Chester that confirmed the truth of this rumor, I contacted the Westchester County (New York) Historical Society. Chris Maranaro, an employee of the society, informed me that he was not aware of any such rumor, and that there was no city or town called Westchester in New York at that time, only a county. There was an earlier town in the area called named West Chester, but it was incorporated into the borough of Queens in the late 19th century, almost fifty years before the West Chester Warner Theatre was built in Pennsylvania.(3) To understand the beginnings of the Warner Theater, it is first necessary to understand the motion picture industry in the years prior to the Great Depression. The Warner Theatre was built during a time nicknamed “The Golden Age of Cinema” when the motion picture industry functioned as a vertically integrated industry “controlling the three major facets of the motion picture industry of production, distribution and exhibition”.(4). In that system, there were five major studios that emerged as the big players during this time–Warner Brothers, Loew’s, Paramount, RKO and Twentieth Century Fox.(5)

The Warner Brothers studio became part of the Big Five with their focus on sound through the use of the Vitaphone sound equipment produced and installed by Western Electric.(6) The first sound movie played on August 26, 1926: a silent film, Don Juan, that had a musical score set to it. Next, the Warner Brothers produced The Jazz Singer with Al Jolsen, which included spoken lines at different parts of the film in 1927. The incorporation of sound propelled Warner Brothers to the top of the motion picture industry and allowed them to expand their business into theatres and studio facilities. They purchased several theatre companies to expand their business, including the Stanley Company of America, which owned 250 theatres, to distribute the new Vitaphone films. That acquisition gave Warner Brothers theatres from coast to coast – 700 theatres in total.(7)

The Warner Theatre in West Chester was part of an effort to expand their operations into new territory. The Daily Local News reported in 1929 that the “Stanley Company has recently been looking for a site to build their theatre in West Chester” and mentioned that the “owners of the sites have been holding out for a higher price.”(8) On February 11, 1929 the Daily Local News reported the purchase of land on the southwest corner of High and Chestnut Streets by the Harrison Brothers of Berwyn for the purpose of erecting a theatre. The article also described the proposed building, which was expected to cost $600,000 including $20,000 worth of Vitaphone equipment and a $35,000 organ. The organ was a key feature in the silent movie industry, and still a necessary part of the theatres during the transition from silent film, which utilized the organ, to the “talkie.” The theatre was also expected to have a full vaudeville stage and a disappearing orchestra pit. According to the article, “work on the theatre was set to begin on the first of May and take approximately nine months to build.”(9)

On June 27, 1929, four months later, the Daily Local News reported that the Stanley Company bought the land for $140,000, $20,000 higher than the original price negotiated by the Harrison Brothers. Construction was expected to cost $700,000 for a thetre that could seat 2500 persons and would become, according to the Stanley Company, “the largest theatre between Lancaster and Philadelphia.”(10) The land was purchased from the estate of Mrs. Francis Jacobs, who had used it for a stable and exercise grounds for her horses. The brick stable was the only building on the site at the time of purchase.

The new structure projected an air of prosperity in West Chester at the height of the Depression, and there was much local excitement about the new building. The September 1930 issue of Bores & Strokes, a company newsletter for the Schramm air compressor company of West Chester, contained a photo of the construction site with a Schramm machine situated in the middle of the steel skeleton.(11) Warner Brothers company representative Harry Gantz, reinforced the excitement in a speech to the Board of Trade at which he “assured the Board of Trade that his firm had every confidence in the stability and growth of West Chester.”(12) Confidence in planning and an expectation of stability were helpful in a country feeling the effects of the depression, and a movie industry trade publication observed that “Warner Brothers' new theatre in West Chester, Pa., commands an important location in a current business development, and has been designed to harmonize and at the same time contrast, with the other building and minor elements of the projects.”(13)