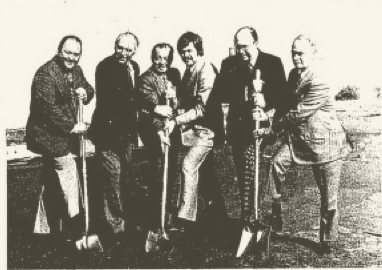 1973 groundbreaking for the August opening of the Carrousel Family Entertainment Center with four theaters of 250 each with family movie choices and seven restaurants. J.C. Fish of Trans-World Enterprises of Dallas is next to Arlington Mayor Tom Vanderfriff in the #2 and #3 spots at left. A follow-up was to open in Coffeyville, KS two months later in 1973. The project was announced in the Spring of 1972 and many more were scheduled for the Dallas-based operation. It didn’t appear to get too much traction.