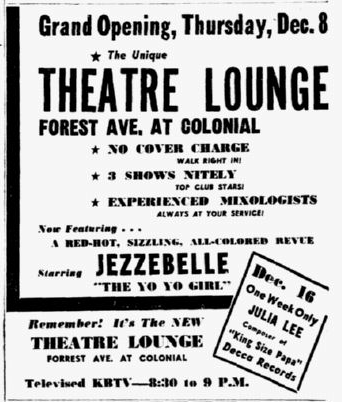 On December 8th, 1949, the Colonial Theatre space was converted into an African American Nightclub called the “Theatre Lounge” managed by Norman Kantor and Dave Tobin. As the ad noted, it was televised locally by KRTV. But television tie-ins weren’t what Theatre Lounge would need in the future as Barney Weinstein found an audience when he re-branded the Theatre Lounge as a strip club with continuous shows beginning in 1950. The wildly successful and notorious lounge would move later in the decade outgrowing the old 300-seat theatre.