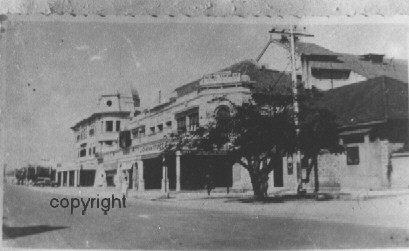 The Regal Theater was constructed in 1931.This Mombasa landmark was made famous on 18 October 1955 when La Scala De Milano performed Puccini’s Madame Butterfly on route to South Africa from Genoa. At this time East African airways and railways had to arrange special flights and trains so that people could attend this Black tie and champagne affair. Puccini’s Madame Butterfly was performed over four nights it was the only theater that could handle this Red carpet affair. This 900 seater gem was equipped with all the modern amenities of the day An Orchestra pit, trap doors, dressing rooms, special lighting and backdrops etc.This elegant theater was designed by William Miller Robertson. Many world famous acts performed there Including the Great Houdini and Van Shipley.Mr Shipley blew the socks of the audience with his 8 string golden guitar and the Regal Theatre sound system. The first performance ever on the Regal stage was “The king of jazz”. The Regal Theater was the most ambitious project by Valli-Hasham and Company. It burned down in 1985.All that remains of this Mombasa landmark is a lot of great memories and priceless antique tiles that are at Sadiq Ghalia’s Mansion in Mombasa. The book “A Regal Romance “by Ameer Janmohamed was written about this great era.