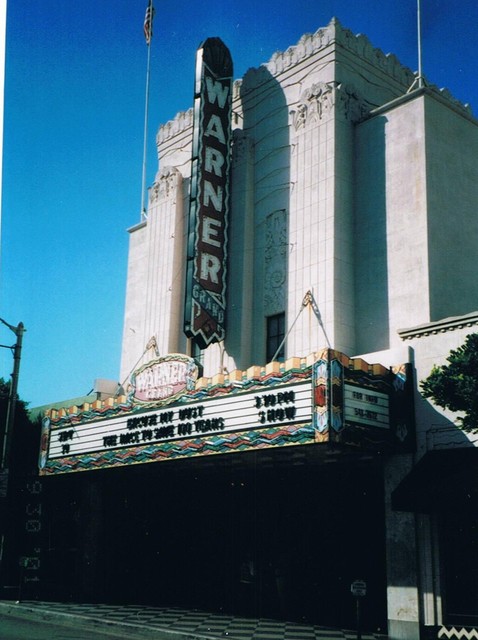 Opened on January 20, 1931 as the Warner Bros. Theatre with Joe E. Brown in “Going Wild”. Film stars Barbara Stanwyck & Joan Blondell attended the opening night of what Jack Warner called his ‘Castle of Dreams’. It was one of a trio of very similar Art Deco style theatres all designed by Benjamin Marcus Priteca for Warner Brothers, the other two were the Warner Beverley Hills (demolished in 1989) and the Warner Huntington Park (later twinned and closed).

The Warner Bros. Theatre was the first theatre in the South Bay area to be built specifically for sound films. It is an Art Deco/Moderne style extravaganza on a neighborhood scale, with an extremely detailed interior designed by interior designer Anthony B. Heinsbergen. The proscenium opening is 50ft wide & 30ft high. There is a fully equipped stage which is 24ft deep. The stage was never used for vaudeville shows and the orchestra pit, which accommodates 12-14 musicians was covered over from the beginning. No organ was ever installed in the theatre. The highly decorated ceiling originally had a large central chandelier. This was later removed after an earthquake shook the area and was never replaced. Four other smaller light fittings in the ceiling still remain in place. Seating is provided for 1,000 in the orchestra and 598 in the balcony.

Over the years there have been very few changes to the building. It was re-named Warners San Pedro Theatre by 1941 and in the late-1940’s a concession stand was installed in the lobby where an ornate water fountain was originally located. From Spring of 1954 it was operated by Stanley-Warner who operated the theatre until the mid-1970’s. It was then leased out and became the Teatro Juarez, specialising in Spanish language movies. It was at this time that the original deep red & gold carpeting in the lobby, mezzanine and lower lounge was replaced by a tiled floor and the five lobby chandeliers were taken down and put into storage. At the same time the seating in the auditorium was re-upholstered in red, green and gold to resemble colors of the Mexican flag.

Eventually the theatre was closed and it was purchased by the City of Los Angeles in January, 1996. During the summer of 1996 the marquee was refurbished and the neon now shines bright again. Now renamed Warner Grand Theatre, it is the last remaining functioning ‘nabe’ south of downtown L.A. and north of San Diego County. It still screens the classics on its 50 ft. screen and hosts concerts on its vaudeville size stage. Since the city’s acquisition, the theatre has undergone a slow upgrading, including the installation of new dressing rooms, new concession stands, a box office area, redone projection and an upgraded stage system. By 2000 the five lobby chandeliers had been restored and re-hung.

This theatre has for over fifteen years been a favorite filming location, seen in numerous TV series from “7th Heaven”, “Melrose Place” and “Party of Five” to major features including “Worth Winning”, “What’s Love Got To Do With It” (standing in as the Harlem Apollo), “Pearl Harbor”, “The Ghosts of Mississippi”, “Seabiscuit” and as a southern West Virginia Bijou in “Win A Date With Tad Hamilton”.

Every Sunday evening, the interior and beautiful exterior of the Warner Grand can be seen in ESPN Classic’s sports movie show, called “Reel Classics”.

The Warner Grand Theatre is listed on the National Register of Historical Places and is a City of Los Angeles Cultural/Historic Landmark.

That shot of the sign and marquee is awesome, Chuck!

It would appear that this theatre has the rare distinction of still retaining the original marquee, always such an important part of a theatre’s design and so often destroyed over the years.
Looks in great shape, would love to go there someday.

The marquee and blade sign were completely repainted in 1996 by John Wittle, then a local painter and funded by Grand Vision Foundation. Originally, only the marquee was to have been repainted back to its original colors, but a local business man made a substantial donation and the blade sign as well as all of the neon were completed.

After stripping the paint off down to bare metal, the original zigzag pattern of the painting was discovered as the marquee had been painted over numerous times. There was a puzzle as to the colors and the proper scheme. When two pieces of angle iron that attached the side panels to the building were removed, the original paint, in like new, undisturbed condition was discovered allowing for a match and pattern to be determined.

What was in many ways important, was that original thin paint strips beneath the angle iron was not stripped for repainting, but re-covered as they were found and still remain as documentation if and when needed.

You can see some of the auditorium and lobby in the new film “Judy Moody and the Not Bummer Summer”.

the Los Angeles Historic Theatre Foundation is giving a lecture on the history of the theatre followed by a complete top to bottom tour of this movie palace on November 8th, 2014. check out http://www.lahtf.org/#news for more details

I just spotted this theater in a new Sprint commercial

The marquee and ticket booth show up prominently in the current film “Live by Night.” 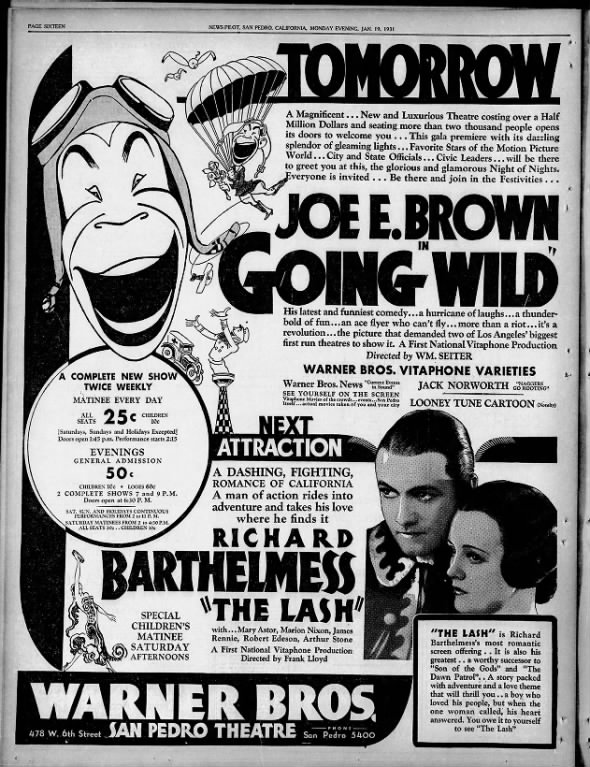 The Warner Became A Stanley-Warner Operated Theater In The Spring Of 1954.