Varsity Center for the Arts 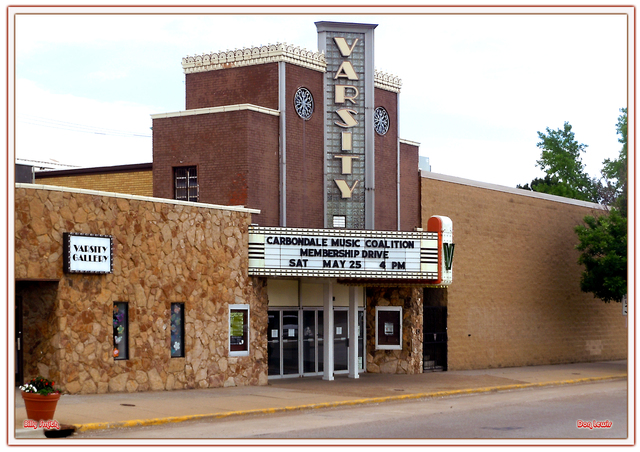 The Varsity Theatre originally opened in 1940 with seating for 1,100. The theater was later twinned, and finally triplexed. The Varsity suffered a fire in 1981, but was remodeled and reopened.

This Art Moderne-style movie house was closed by its last operator, Kerasotes Theatres, in May of 2003.

In early-2008, it was acquired from Kerasotes by the Stage Company of Jackson County, which plans to renovate and restore the historic Varsity Theatre as a venue for live theatrical productions. The ongoing restoration project is going to be done in three phases, with work anticipated to be completed by 2012.

The theater reopened to the public in October 2008 as the Varsity Center for the Arts with a performace of the Neil Simon play, “The Star-Spangled Girl”, kicking off the Stage Company’s 2008-2009 season.

The Varsity burned on February 16, 1981. The third theater was already constructed at the time. The fire was caused by a worker’s cutting torch, he was cutting a piece of conduit that went thru the wall between the back of the main theater and the new one. Sparks from the torch went thru the pipe and ignited some seats stacked against the wall behind the main theater. the fire then spread to a curtain on the screen and went up into the attic. The main theater was completely destroyed. The second and third theaters suffered major smoke damage. The Varsity was closed for the next three and a half months. It finally reopened for business as a triplex on June 12, 1981. The following movies shown that night were Raiders of the Lost Ark, Breaker Morant, and Clash of the Titans. A newspaper ad for June 11 proclaimed the Varsity had new seats, new decor, new sound and projection equipment, and new transitional heating and air conditioning.

The last two movies shown the day before it burned were Altered States and Charlie Chan and the Curse of The Dragon Queen.

I also forgot to add that in either April or May they had one screen running films, more than likely it was the new third screen they had just opened. The other two theatres were still being renovated at the time.

The Varsity is set to reopen tonight. The stage company has renovated one of the theaters and will present their first production there this weekend. They also clean-up the lobby and restored the marquee. The Southern Illinoisanhas an article and video up on their website today about the reopening.

According to the article, there is still a lot of work to be done – the nlobby, intermission room and the “east” auditorium (the addition) have been refurbished; future stages call for renovating the main auditorium and balcony; total cost would be about 4.5 mil, to be completed by 2012.

The February 22, 1941, issue of Boxoffice published a photo of the Varsity Theatre in Carbondale. The caption attributed the design to St. Louis architect Oliver W. Stiegemeyer.

Additional photographs of the Varsity illustrate an article about the recently-opened house in Boxoffice of August 17, 1940.

The 1940 Boxoffice article cited earlier identifies the architect of the Varsity Theatre as Oliver W. Stiegemeyer.

On my trip through downstate Illinois last Summer, I shot some photos of the Varsity. Here’s a link to the first one. Subsequent ones follow on my Flickr photostream.