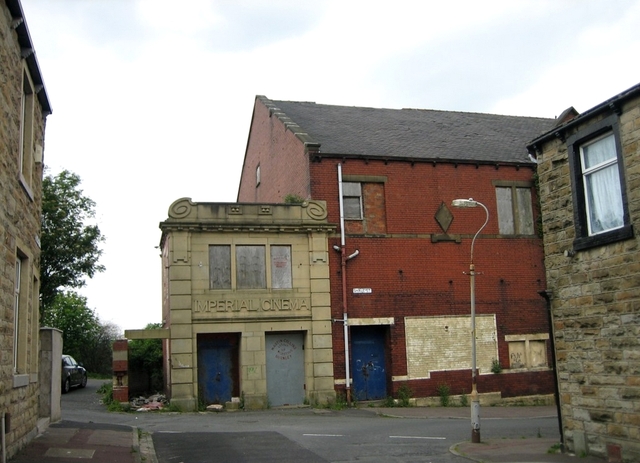 The entrance to the Imperial photographed from Redruth Street.

Architect’s drawings (see another photo) show that the ashlar stone-faced main entrance was to have been capped with a truncated pyramid, supporting railings and a flag pole. It wasn’t constructed. The drawings also show that there was another entrance door on Shale Street at the screen end of the building. There was a small lobby with a small pay box (for patrons of the front/cheap seats).

The two doors under “Imperial Cinema” open into the “crush hall”; the blue door to their right is an emergency exit from the foyer across the back of the stalls.

The three windows above “Imperial Cinema” are into the manager’s office.

The projection room was a narrow box construction protruding half a dozen rows into the centre of the rear stalls. It looks to have been rather cramped. It was accessed from the foyer across the back of the stalls. A door from the foyer opened into an ante-room, from whence another door opened into the ‘box’. How and where it and the projectors were ventilated isn’t shown in plans. Ducts to the north wall over the heads of the rear stalls, via the circle void, look the only option, but there are no tell-tale signs on that wall in any photo.