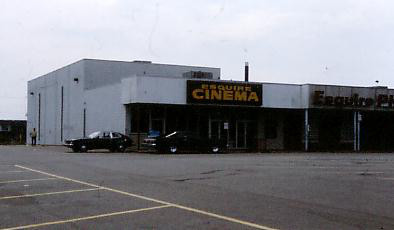 This photo prior to the refurbishment of the entire Esquire Plaza around 1982, which standardized signage and built-out a new upper facade for the whole strip mall. Brown sign, illuminated internally with florescent tubes, was a cheap replacement for the original Jerry Lewis signage. Ticket window and entrance are located on the left side of the storefront. Store adjacent to the cinema is the Esquire Pharmacy. Photo apparently shot on a weekend morning, prior to opening for early shows: the cars in front appear to belong to the projectionist (Jack) and theater assistant manager.

Sadly, no higher resolution available. Anyone have any other pictures?