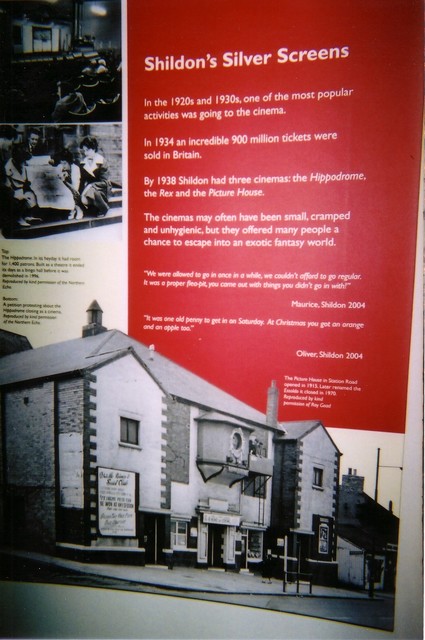 This is the complete wall display on view in Timothy Hackworth’s house, Shildon.

Whilst the caption says “The Picture House, Station Street” (later Essoldo) it is actually the Hippodrome.

Reference is made to the town’s cinemas being small and unhygienic;the Rex, was indeed small and hardly the cleanest of establishments.The Essoldo was even smaller although quite clean- at least until its latter days….. The Hippodrome was larger than both the Rex and the Essoldo put together and had high standards of hygiene.

The photo insert at the top left of the display is of the Stalls with a few Bingo players waiting for ‘eyes down’ in, I am guessing, the 1980’s. I base this assumption on the apparent lack of house tabs which were retained for many years after it showed its last film and presented its last stage show.

I could also have added , house tabs notwithstanding,that it is not at all busy and in sharp contrast to the 1960’s when people were reputed to sit in the aisles with their bingo books on resting boards. This was also the case at the Hippodrome (Essoldo) in Bishop Auckland when it first went over to bingo in 1966. The ‘Gods’(not used since its Variety Theatre days) were not only reopened and packed out but players also sat on the stage and in the aisles. Had this been allowed to happen in cinema days the Licensing Authorities and the Fire Dept would have come down upon the Cinema Management like that ton of hot proverbial bricks……..