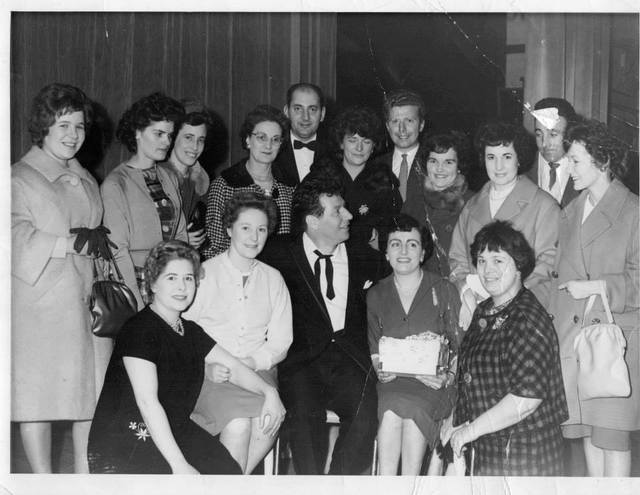 The ABC Globe Stockton backstage in 1962. George Skelton, Manager is at the back with Assistant Managers, John McIntosh and Bill Postgate.

George had invited members of The TownsWomens Guild (it was the Chairman’s birthday) to meet Max Bygraves who was headlining a week’s variety show.

George became a good friend some years later whilst at the Haymarket Newcastle and ABC Darlington after a period as Manager of ABC Chester following the sale of Stockton to next door Debenham’s Department Store. Thankfully, the store group decided, after all, not to extend onto the ABC site and it was subsequently leased short term to the Lipthorpe Brothers (Fiesta Club etc) before being sold to Mecca who operated it as a Bingo Club until they moved to new purpose built premises in 1997.

Now, happily, the building is being restored to its former glory for live presentations but it seems unlikely that it will ever again show films; this will be a great pity as it would be ideal for Premieres of major new releases prior to general release in the multiplexes.

At ABC conventions and meetings up and down the UK necessitating hotel stays, Managers were invariably allocated twin rooms (not so for the great and the good…) and George and I often shared on this basis.

He told me about his experiences (he had started as a reporter with the Grimsby Telegraph after WW2 prior to joining ABC in 1948) particularly in relation to the lavish live shows at Stockton and elsewhere.

The event which caused him the most excitement (of the wrong kind) was when,on November 22nd 1963,The Beatles were headlining a show at the Globe which also included The Vernons Girls and the Kestrels.

This date, of course, goes down in history for a world shaking event, namely the assassination of John F Kennedy. The Beatles, unable to contact Brian Epstein, were unsure whether or not they should appear as events globally were being cancelled as a mark of respect.

Much to George’s great relief the show did go on and one can only imagine the furore which would have resulted when having to deal with fans more upset by The Beatles' non appearance than by the death of the US President….