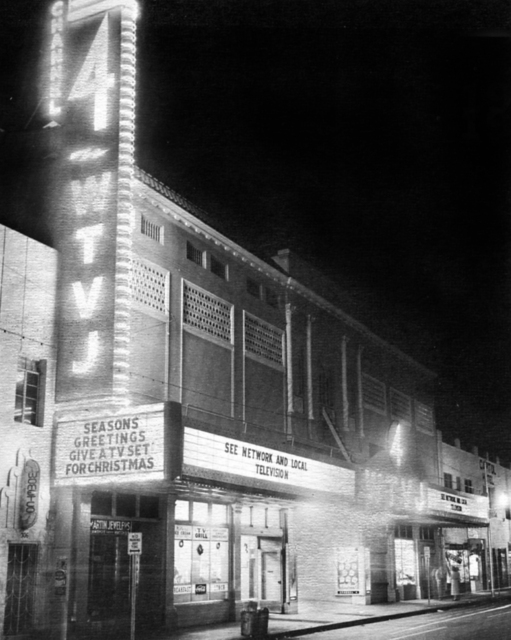 This view, looking northwest, shows the front facade of the Capitol Theatre during the holiday season in 1958, six years after its conversion to a television station. The official address of the TV station was listed as 316 N. Miami Ave, but the corporate offices of Wometco (owners of the station and the former theatre) visible in the lower left corner retained their address as 310 N. Miami Ave.

The vertical blade and horizontal marquees of the theatre were changed to include the WTVJ logo and call letters, but the changeable message marquees and poster cases were kept, and used to promote upcoming TV shows. WTVJ retained a team of sign painters on staff to create original promotional artwork through the 1970s.

The TV Grill restaurant and Coca-Cola logos are just visible in the lighted windows to the left of the lobby entrance. The TV Grill restaurant was in continuous operation by the same family through 1999. Wometco was the regional distributor for Coca-Cola products, as well as the owner of numerous other theatres in Miami and the Miami Seaquarium (which they still own in 2011).