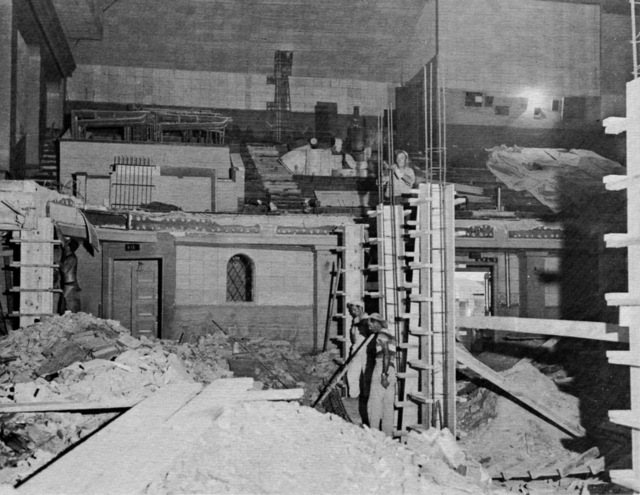 Wometco’s Capitol Theatre in downtown was the first house in the Wometco chain and the first link in the Caribbean chain’s theatre and leisure dynasty. Built in 1925 as a mini replica of the New York Capitol Theatre, it was opened on June 25, 1926 with Laura La Plante in “The Midnight Sun”. It was equipped with a ‘Mighty’ Wurlitzer organ. It closed in 1952 and became a victim of television in more ways than one.

It became the home of WTVJ, the Wometco TV station, Miami’s first.

The building was demolished in 2000.

We need a correction on the Overview.

The 1970’s blaxploitation revival of the Capitol was actually at the Skydome/Harlem on 14th street, and not here.

In 1971 the Wometco complex at 316 North Miami Avenue was a group of old buildings (including what had been the original theater) connected internally, with the floor at different levels, termite-infested, claustrophobic, without windows, a veritable fire trap; there was an empty lot on the 3rd Street side for parking. I don’t recall it at any time looking like that drawing, that must have been only a proposed draftsman rendition that never materialized.

Didn’t the blaxploitation revival of the Capitol refer to the one at 1645 Broadway and 51st Street in New York?? I think.

It was the Miami Harlem. The NYC was Capitol was already closed by the time blaxploitation hit Times square.

I remember the Capitol Theater being west of 95. I want to say it was off 3rd Ct. somewhere between NW 8th Street and 3rd St. Wish I could remember the exact street. The other address off 14th Street had a theater there, but I don’t think it was the original Capitol. Channel 4 was east of 95.

What that 1929 trade ad fails to mention is that tourism could add hundreds of thousands to that population number.

In the 25th anniversary version I saw last week of the tv special “Hurricane Andrew As It Happened” Tony Segreto says the place where he, Bryan Norcross, and Kelly Craig famously took shelter to continue broadcasting and advising the public during the storm as WTVJ remained on the air was the balcony of the former theater.

Click here for a Youtube video from the Wolfson Archives showing them relocating from the broadcast desk to what I guess is the balcony stairs. Towards the end Tony has the camera pan around to show some equipment and their surroundings.

David – you are correct. The balcony risers and steps, which you can see in the top half of photo #11 under the projection booth windows, were converted to studio audience seating when the theatre was made over for television in the 1950s, and were placed behind large “sound proofing” windows, which can be seen along the left wall in photo #9.

By the 1990s, the window glass had been removed and replace with a wall, which Tony and Bryan reference in the YouTube video. Just this past week on The Weather Channel, during coverage of Hurricane Harvey, Bryan showed an extended video of their move to shelter in the Capitol Theatre/WTVJ Studio A in 1992.

Wow, did you work for WTVJ and/or the Capitol? How do you know so much about this theater?

What was under the floor that supported Studio A in the space between that floor and what had been the theater‘s floor?

I never got to see the outside of the Capitol/WTVJ cause I never had a “reason” to walk down that street before it was demolished. Also from the Metromover on my way to Bayside and such the glimpse I could get of the block didn’t look like much to me at the time in the 90‘s, then it was gone.

Yeah I forgot to mention that Andrew was in 1992 since here in Miami anyone concerned “already knows” that, while Cinema Treasures is worldwide.

In the 25th anniversary version of “Hurricane Andrew As It Happened” Tony says the Capitol was the first movie theater in Miami, but the book “Historical Sketches And Sidelights Of Miami, Florida” printed in 1925 says the first was Kelly’s Theater in 1906, later named The Arcade, for which I established a page on Cinema Treasures.

Btw, the Wolfson Archives website has some of their collection of Miami produced programming online, and sometimes local events to attend. I believe the Archives has a lot of WTVJ’s broadcasts in their vaults.

The Capitol Theatre opened with “The Midnight Sun” on June 25th, 1926 during the building boom. 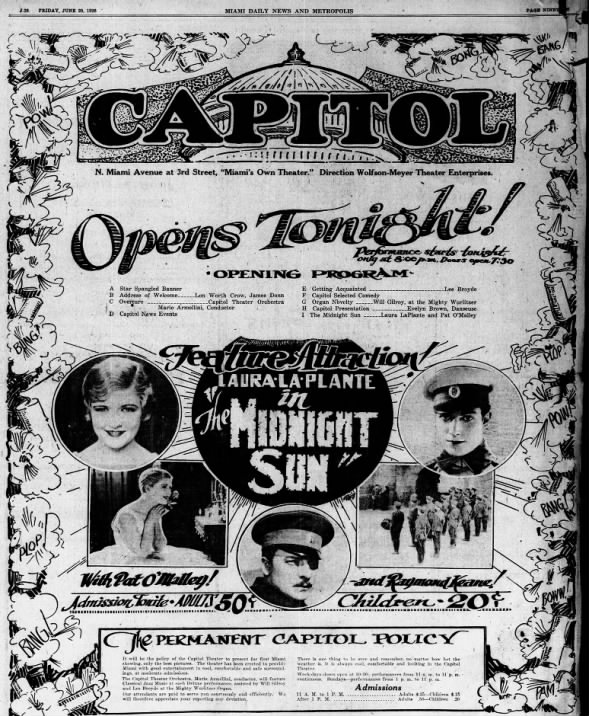