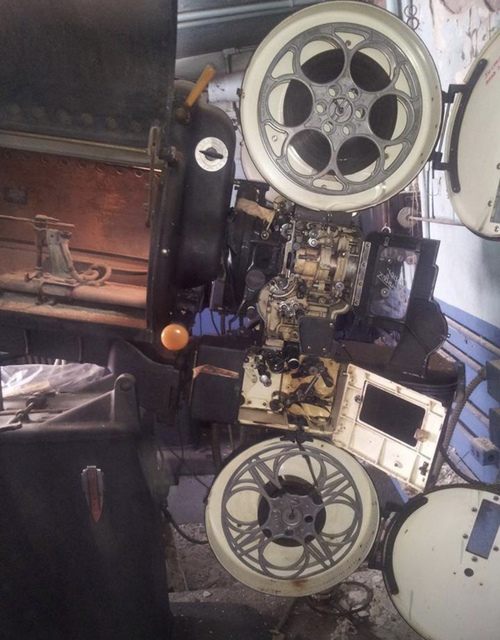 All threaded up, powered up and ready to go! In this picture, the doors on the reel magazines, projector head and soundhead are all open as they would be for the projectionist to thread the film in the days of the highly flammable nitrate film stock (pre-1952). It was imperative that the projectionist keep all 4 of these doors shut at all times when there was film threaded and/or running. The idea was to keep every inch of film sealed off inside of the projector so that in the event of the film catching fire during a screening, it would be completely contained inside the projector. See note on a photo a few down in this gallery (the closeup of the lower reel magazine on the projector) where I went into much greater detail about nitrate film.

Also, to the left is the carbon arc lamphouse with the door open. In the center of the lamphouse, you will see a long, pencil-thin horizontally positioned rod; this is one of the two (one positive and one negative) carbons that would burn to create the light source for of the projected image. The projectionist would have to keep these in adjustment as they burned and would have to change rods between reels once they had burned down; a positive would typically last 20 minutes and a negativ typically 40. Carbon arcs were largely replaced by Xenon lamps starting in the late 1970s, despite having s superior quality of light. Also note that the door of the lamphouse (open in this picture) would also frequently have to be opened and closed to flange carbon rods however they must remain closed when it is powered up and an arc is burning; a projectionist would have to be very carful to remember not to open the door before killing the power or strike the arc while it was open as it would blind anyone who was looking at it.