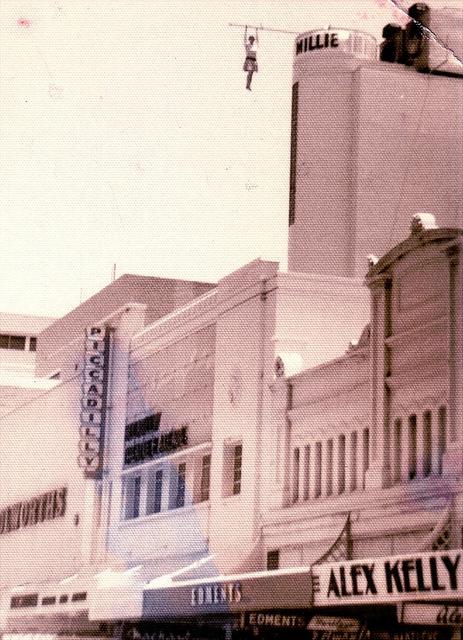 Millie Comes to Perth’s Piccadilly – Greg Lynch says – The year is 1967 and Piccadilly Theatre management demonstrates a creative style of Showmanship in the promotion of the Universal Pictures production “Thoroughly Modern Millie” A mannequin had been dressed as Julie Andrews in a flapper costume and appears to be hanging with both hands from the theatre flagpole (flying way above Hay Street).This attracted a lot of attention (and stiff necks) – I took the B/W photo of Millie hanging on the flagpole while visiting Perth in 1967 with an old Box Brownie (the only camera to hand). To me It demonstrated an “out-there” old style of showmanship, something that’s missing in today’s automated digital world of concrete boxs. In 1967 I was with Universal Pictures in Melbourne, and as an old Perth boy I would return frequently to see industry friends & family. I have strong memories of The Piccadilly as a quality mainstream city release house.

Wonderful pic! I fondly remember seeing Thoroughly Modern Millie at the Piccadilly on a Friday night in 1967. It was packed to the rafters.