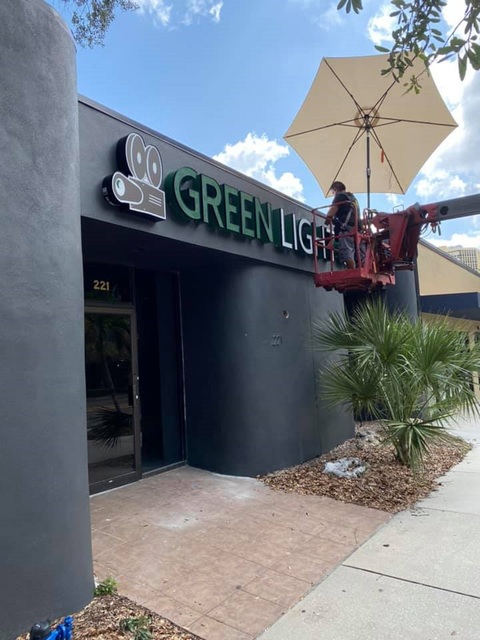 New St. Petersburg Independent Movie Theater to Get Some “Action” This Weekend By Scott Harrell Tampa PUBLISHED 11:47 AM ET Oct. 02, 2020

ST. PETERSBURG, Fla. — Nobody has had a hard time finding movies to watch during the COVID-19 pandemic—the shutdown and self-quarantining has been a boon for streaming services of all types.

The experience of watching a film in a theater, on the other hand, is something a lot of flick fanatics are sorely missing. And while some theater chains are cautiously reopening, health experts are warning that spending two hours in a crowded room full of recycled air isn’t exactly the safest option.

The opening weekend movie will be “The Nest” starring Jude Law Northeastern transplant Mike Hazlett is offering something of a compromise when his “art house” movie theater, Green Light Cinema, opens this Friday at 221 2nd Avenue North in downtown St. Petersburg.

“I actually only put in half the seats,” says Hazlett. “So there’s already six feet between the rows of seats. And we’re going to require masks coming in, masks in the lobby, masks going to the bathroom.”

Hazlett, who moved to St. Pete five years ago and has worked in various areas of the film industry, says he can’t believe there’s never been a small, independent movie house in the downtown area—particularly when people he meets are constantly singing the praises of a certain long-shuttered indie theater out on St. Pete Beach.

“Everybody loves to talk about the Beach Theatre,” he says with a laugh. “But that was, you know, out on the beach.”

Hazlett has been working on his vision for Green Light Cinema since last year, and says finding the right location was the biggest challenge. Once the 2nd Avenue North setting was secured, he went to work in earnest, only to get shut down by the shutdown.

The decision to open while the coronavirus is still at large wasn’t an easy one, but with the space ready to go, and sensing that some buffs were itching to get back to a true theater experience, he opted to go ahead and open at an extremely limited capacity. He’ll only be seating between 30 and 35 people in Green Light’s single screening room starting this weekend, and showing first-run movies on Friday, Saturday and Sunday. The opening weekend’s feature is the highly-rated new film “The Nest,” starring Jude Law; the following weekend, Green Light will screen the Angela Bettis and David Arquette-led horror-comedy “12 Hour Shift.”

Weeknights will be reserved for… well, whatever Hazlett feels like cooking up, from old favorites to new local talent.

“I’ve got four days during the week to do you know, retro, I’ve got a bunch of local filmmakers doing stuff, maybe a Humphrey Bogart festival,” he says. “We’re just going to try to get creative. I think the key to all of this is being able to kind of maneuver and listen to your audience, listen to your community and figure out what works."