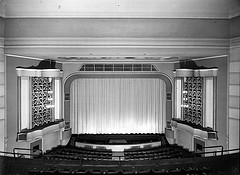 I remember watching films there as a child and later the conversion to Bingo. I have also watched a film in the video cinema, this was especially leading edge technology at the time but also very unreliable and very poor and dark image quality. Little did I know at the time I would later work as a projectionist and later in life work along side John Hayward at the Ambassadors Woking who used to be a projectionist at the ABC Woking!