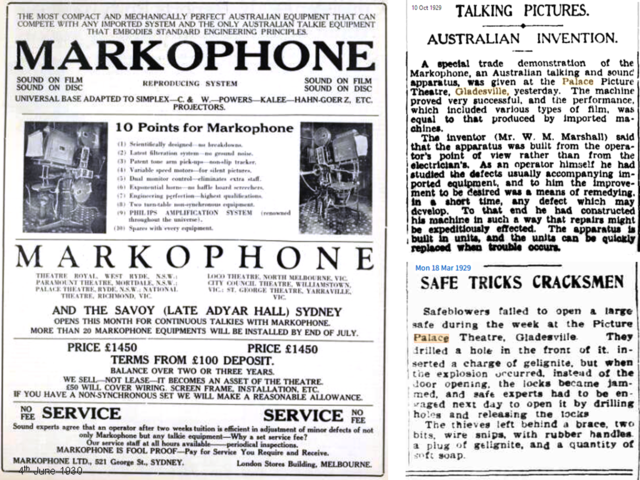 Following the introduction of ‘talkies’ to Australia (29th December 1928), quite a few local engineers and projectionists developed sound reproduction equipment for cinema use. Main selling point was cost – the asking price being considerably less than the 4-5,000 pounds required for top-of-the-range American Western Electric set-ups. On 9th October 1929 a trade/press demonstration was presented at the Gladesville Palace where new ‘Markophone’ equipment had been in use for several weeks. On 23rd November 1929 exhibitor George Dean took advantage of the ‘refund if not satisfied within three months’ contract clause, and upgraded to Western Electric. (The only city installation of Markophone was 20th June 1930 at the Sydney Savoy. Six weeks later they also changed to Western Electric. After a series of legal disputes with some of its twenty customers, Markophone soon folded.)