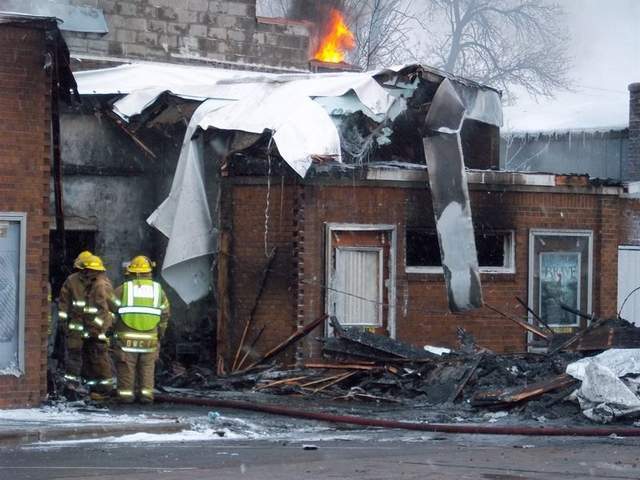 COLBY, Wis. (WEAU) — Hundreds of people came out Friday morning to say goodbye to a hero. Jamison Kampmeyer, a firefighter and sheriff’s deputy was laid to rest in his hometown of Colby. The 34-year-old father of three was one of five local firefighters injured while trying to save the Abbey Theater in Abbotsford from a devastating fire.

Kampmeyer passed away from those injuries Sunday night. His funeral was held at Colby High School followed by a massive final tribute. Flags flew at half staff outside the school and across Wisconsin, following Governor Scott Walker’s order to honor Jamison Kampmeyer. “He was a hero and a good leader. He was a good friend of mine and was very active and great in the community,” said friend Jeff Sobpa.

Friends and family of Kampmayer who came to the funeral were supported by hundreds of firefighters, police officers, sheriff deputies and people from all around.

Megan Arrias of Abbotsford said she feels for Kampmeyer’s wife. “Having three kids myself, I can’t imagine what she’s going through right now. Did they get to say goodbye? You never know what will be their last moment; they put their life on the line everyday,” Arrias said.

Although cameras weren’t allowed inside Colby High, we know the school’s gym was packed with mourners. Two overflow rooms with video screens were also filled to capacity. Mourners told WEAU 13 News that the funeral mass started with kind words about the Colby Volunteer Firefighter and Marathon County Sheriff’s Deputy.

Some of those words came from Governor Scott Walker, who spoke at the funeral.

“He also did a really neat thing at the end when he thanked his parents and wife and told everyone that it’s their responsibility to let his kids know that he was a hero,” said Jenn Rassett, a friend of Jamison Kampmeyer. Firefighters who came to show unity said Kampmeyer had a passion for law enforcement and firefighting. “He was one of those guys that you could count on for anything. You’d call and he’d be there,” said Jay Thums, a friend from the Rib Lake Fire Department.