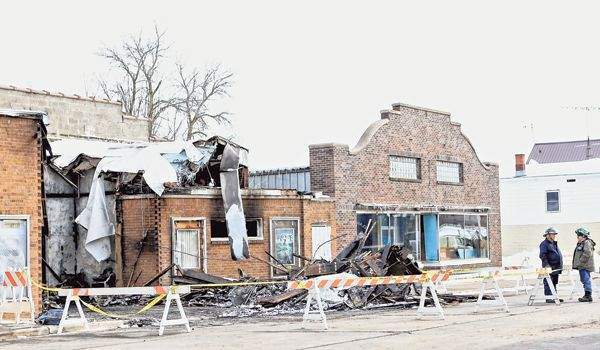 This small town theatre was located on First Street just north of Linden in downtown Abbotsford. It was open on weekends playing first run attractions

Here is another photo:
http://tinyurl.com/y8wzx5r

I think this theater can be marked down as closed and demolished. A fire swept through it today injuring fire fighters when the roof collapsed. Here is the link to the story http://www.waow.com/story/17075826/crews-battle-blaze-at-abbotsford-theater

Lamentably, one of the injured fire fighters has died as a result of the blaze.

Here’s a link to another story about the fire at the Abby: http://www.greenbaypressgazette.com/article/20120305/GPG0101/203050494/1-firefighter-dead-4-injured-fighting-theater-fire-Abbotsford?odyssey=mod%7Cnewswell%7Ctext%7CGPG-News%7Cs

How old was this theater?

According to the article about the fire, the theater opened in 1949.

On March 9, 2012, the National Response Team (NRT) from the Bureau of Alcohol, Tobacco, Firearms and Explosives (ATF) along with agents from the ATF St. Paul Field Division and State of Wisconsin-Department of Justice-Division of Criminal Investigation-State Fire Marshal’s Office completed the investigation into the cause of fire at the Abby Theatre, 216 N. 1st St., Abbotsford, Wis. One firefighter was killed and four injured during fire suppression efforts.

The cause of the fire was ruled to be accidental, announced Wisconsin State Fire Marshal Director Tina R. Virgil and John Schmidt, Acting Assistant Special Agent in Charge (ASAC), St. Paul Field Division. Investigators said the fire started in the lobby area of the theatre and was accidental in nature.

Schmidt said “Over the past six days investigators have taken countless photographs, inspected and examined artifacts recovered from the scene and conducted more than 60 interviews. The information developed was reviewed and analyzed to assist in determining the cause of the fire.”

On that Sunday at approximately 12:16 p.m., the Abbotsford Fire Department (AFD) received a call of a report of fire at the Abby Theatre. Abbotsford immediately requested mutual aid from the Colby, Owen-Withee-Curtis and Dorchester Fire Departments. Three Colby firefighters inside the theatre suppressing the fire became trapped following a partial roof collapse. Two firefighters were rescued and the third firefighter was recovered and subsequently died.

Due to the loss of life and injuries to the firefighters, the Abbotsford Fire Department requested assistance from the Wisconsin DOJ-DCI-State Fire Marshal’s Office and the ATF NRT. The investigators worked together as a team over the course of the investigation to determine the origin and cause of the fire. Damage estimates: approximately $300,000.

ATF’s NRT personnel from across the country responded to the scene to work alongside state and local investigators, including a canine team, certified fire investigators, forensic chemist, electrical and fire protection engineers, and additional specialists, the 5th that fiscal year and the 726th since the team was created. http://www.atf.gov. (Information courtesy Special Agent Robert Schmidt, PIO-ATF –(651) 726-0316)