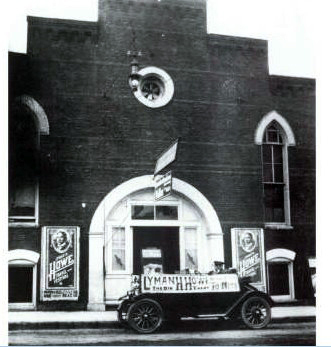 The Adler Opera House was built in 1897.

The Adler Opera House was the first theater in the Adler Theater Company. The company was started by J.P. Adler of Marshfield on December 1, 1908 when he took over the opera house. (His father built the opera house.)

The last movies were played in 1955; it was then rented out as an Army Reserve Armory, and later became the Marshfield Youth Center. The building was later sold in 1964 it was later razed.

I recently completed writing the biography of my great uncle, Bee Ho Gray. He was a Western performer from Indian Territory. He performed at the Adler Opera House during the week of April 13, 1908.

The following history of the Adler Theater was provided by the Adler Family for the Marshfield Hisory Project publication, The Marshfield Story, 1872 – 1997, Piecing Together Our Past. The story apears on pages 236 – 237.

The name John Peter (J.P.) Adler is synonymous back to the early 1900’s with the Adler Movie Theaters. It was with this start in the entertainment field that J. P. Adler carried on entertainment empire that would be a part of Marshfieldâ€™s history forever.

John Peter Adler was born in Marshfield on September 28, 1887, to Phillip and Margaret (Hoffman) Adler. He was the seventh of thirteen Adler children and one of five sons. When he was nine, during his school vacation, J. P. helped haul bricks for the Opera House which was being built by his father, Phillip. At the age of 11, he captained the bill boys who distributed theater advertising throughout the city, and later became bill poster and stage manager for many attractions that played the Opera House.

Among the young actors and actresses in the road show companies which appeared here in the early days were some who went on to fame in the theater – John Barrymore, Boris Karloff, Frank McHugh, William Desmond, Charles Winninger and May Robson.

On December 1, 1908, J. P. Adler took over the Opera House that his father built on East Second Street back in 1897. Meanwhile, the movies, which were to deal a death blow to many road show companies playing the smaller communities, invaded the theaters. He scheduled Marshfieldâ€™s introduction to the new form of entertainment for February 22, 1909. However, all the advance promotion was made useless, when the films failed to arrive.

In June 1918, a decade after he leased the Opera House, J. P. Adler purchased the Trio Theater. In November 1922, a new $12,000 organ was added to the theater. In 1927, after extensive remodeling, J. P. held a contest to rename the theater. It was named â€œRelda,â€ which is simply Adler spelled backwards. The premier of the â€œtalkiesâ€ came to Marshfield on November 30, 1929, with the selected choice being â€œHome Towners.â€ Adler had installed a new sound system for this occasion which also marked 21 years in the business.

On his 50th birthday, September 25, 1937, J. P. opened the New Adler Theater with the feature movie â€œThe Big City.â€ Designed by Minneapolis theater architect Perry E. Crosier, the New Adler Theater presented a facade of polished granite and black vitrolite glass, with a large canopy. An electric sign tower emitted 18,000 watts of light from an assortment of colored bulbs and neon tubes. Inside, beyond the many extravagances, the theater also boasted of automatically controlled air-conditioning, a high-fidelity sound system, and state-of-the-art film projectors with high-intensity lamps. In the late 1940’s, J. P. expanded the lobby areas of his theaters to include concession stands offering candy, popcorn and soda, thus taking advantage of the snacking habits developed by television viewers.

The popularity of home television viewing caused changing times in the theater business. In 1953 Adler built Marshfieldâ€™s first drive-in theater at the 10-13 corners. It made movie-going more convenient and affordable to couples with young children, and of course to teenagers, who quickly discovered the delights of â€œthe passion pit.â€ In 1955, J. P. redecorated Marshfieldâ€™s Relda Theater, and stopped showing movies at the old Adler Opera House. He returned it to a meeting hall for â€œgatherings of various types.â€ By 1958, J. P. had converted the Relda to a retail store and sold off all his central Wisconsin theaters, except the Adler and the 10-13 drive-in in Marshfield, the Rosa in Waupaca, and the Adler in Neillsville. Even with these roadblocks, J. P. marked his fiftieth anniversary in the business with a series of special events on his seventieth birthday. The New Adler Theater, now â€œDowntown Marshfieldâ€™s only theater,â€ featured â€œstellar entertainmentâ€ every night for a week.

Nine months later, J. P. was fatally stricken while playing golf with friends at the Marshfield Country Club. His ambition had driven him to work hard, to do his best, to succeed. His peers in and out of the movie industry came to respect him as a decent, honest person and as a progressive, highly successful businessman.

Marshfield was not the only city to have benefited from J. P. Adlerâ€™s interest and dedication in the entertainment industry. Other cities in Wisconsin, that were also touched by him included Stevens Point, Merrill, Milwaukee, Monroe, Neillsville, Waupaca and Antigo.

All good things must end sometime, but the sale of the Adler Block in 1964, and the razing of the Adler Opera House with all its memories and potential for the future were very difficult to absorb with grace. The â€œOld Adlerâ€ had served as the National Guard Armory and also the home of the Marshfield Youth Center.

In 1963, Youth Center manager, Paul J. Rogers, was hired by the Adler Theater Company. After working in nearly every position in the theater from Usher to Doorman, he was called for military service. When he returned, he became assistant manager and later manager of the Adler Company. In 1972, he became the new owner of the business in Marshfield.

Submitted by Betty Adler; with excerpts from â€œBig Ambitions in a Small Town: The Story of J. P. Adler and the Moviesâ€ written by Jan Coombs

The following history of Rogers Cinema was provided by Paul Rogers for the Marshfield Hisory Project publication, The Marshfield Story, 1872 – 1997, Piecing Together Our Past. The story apears on pages 306 – 307.

As the city of Marshfield prepares to celebrate its 125th birthday, Rogerâ€™s Cinema Theaters will celebrate its 25th Anniversary. It started in June of 1972 when Paul J. Rogers purchased the Adler Theater and 10-13 Drive-in theater from the J.P. Adler family. The Adler theater started in 1908.

Many changes have been made since 1972 not only to Marshfield properties but also other cities in three states. In 1973 the previous Adler theater building at 419 S. Central Avenue was renovated into a two-screen theater and renamed Rogers Cinema I & II. Three years later, Rogers Cinema Park was built on Marshfieldâ€™s south side. Now Marshfield had four screens, three indoor and one drive-in.

In 1977, Paul Rogers and John V. Koran formed a partnership and began further expansion of the Cinema. That year, they built the restaurant space adjacent to the theater and leased it to the Severt Family for the home of Severtâ€™s Fine Foods. A couple of years later it was sold to the Severts. Also in 1977, they purchased the Wisconsin Rapids theater and converted it to Rogers Cinema 1 & 2 and they built a new Rogers Cinema 1 & 2 in Stevens Point. That same year they leased three drive-in theaters from Badger Outdoor theaters, the Startlite at Green Bay, Hwy. 26 at Janesville, and Hwy. 51 at Stevens Point.

Roger Cinemaâ€™s first venture out of state occurred in 1984 with the purchase of the triplexed Chief Theatre in Red Wing, Minnesota. This was a 50/50 partnership with Bill Uthmeier of Marshfield and Rogers Cinema Inc. In 1994, Rogers Cinema purchased and multiplexed theaters in Marquette, Michigan.

Whether remodeling, adding screens, buying and selling properties, operating some and leasing out others, Rogerâ€™s Cinema contributes to the communities they call home. In 1996, Rogerâ€™s Cinema undertook a major renovation of their Marshfield theaters when they purchased the two adjacent properties and expanded Rogers Cinema to seven screens. The new Rogers Cinema was officially opened during September. The next month, at the Main Street Marshfield, Annual Meeting, held October 3, the Rogers Cinema expansion project was recognized as the New Building Project of the Year.

This PDF of an undated page from the Marshfield Times has an ad for the Adler Opera House, which was presenting a program of “Vivaphone Singing and Talking Motion Pictures” on September 3. The year was most likely 1913, as that’s when the English Vivaphone system premiered, and the ad touts the “New York and London Success” of the movies.

The photo of the Adler Theatre that Lou Rugani uploaded here a few days ago actually depicts not this house, but the 1937 New Adler Theatre on Central Avenue, which is listed here under its current name, Rogers Cinema 8. Maybe the photo can be moved to the correct page, and this comment can then be deleted.

As I was growing up in Marshfield, the Alder Opera House was known as the “Old Adler” after it was closed the space was used as an armory for a unit of the 84th Division Army Reserve until it was demolished. The basement also housed the “Palm Garden” tavern

September 25th, 1937 grand opening ad for the New Adler in the photo section.

The old Adler reopened as a 2nd run cinema on October 14th, 1945. Grand opening ad in the photo section.