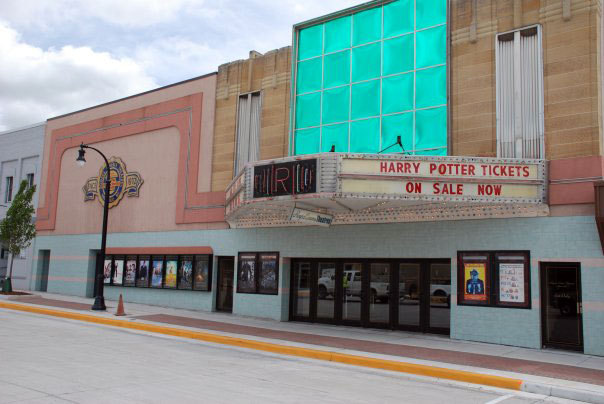 The theatre was originally built for the Adler Theater Company.

The theatre opened as the New Adler Theatre on September 28, 1937 with the movie “Big City”.

In 1973 the building was renovated into a two-screen theatre and it was renamed Rogers Cinema 1 and 2.

In 1984 the cinema was remodeled, the upper theatre was divided making a third auditorium, creating Rogers Cinema 1, 2, and 3.

In 1996 the cinema had major renovation expanding the cinema to seven screens, creating Rogers Cinema 7. It now operates as an 8-screen movie theatre.

The theater is on the Wisconsin Architecture & History Inventory.

The “New Adler” theater was built with “Stadium” seating and was the first theater in Marshfield to be air conditioned. In the 40’s the lounge area under the upper portion of the auditorium was renovated and a concession stand put in. Snacks were conventional movie fare, popcorn, candy and soda. The building was art deco inside and out. Much, if not all of the lighting in the theater was neon strip lighting that ran the length of the auditorium hidden in a ceiling sofit and side features. The canopy over the Central Ave sidewalk had both incandescent and neon lighting as did the blade which was centered over the canopy. The incandescent lights were all connected to chase mechanisms that sequenced the light. Click on “photos” to see Roger’s 8 picture

7 screens opened during June 1996 completed on the 27th. Articles: