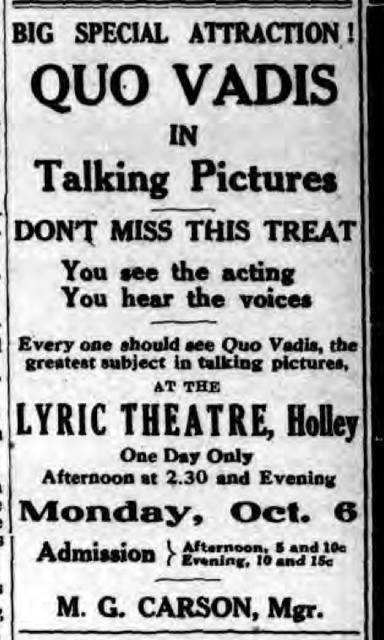 Earliest block ad I can find for the Lyric Theatre. Appeared in the October 2, 1913, edition of the weekly Holley Standard. The movie was made in Italy and is one of the earliest known “epic” feature films. It may be the first such film to have had a road-show like run at a major New York theater, premiering at the Astor Theatre on Broadway, nearly six months earlier in April, 1913. The presentation in Holley had the advantage of being a “Talking Picture” - which was a gimmick whereby vocal actors behind the screen would speak the “dialogue” in sync with the presentation on screen. Apparently, this was a trend that was making the rounds along various moving picture circuits around this time. A blurb from November 20, 1913, in the Standard, advertised “The Dramagraph” at the Lyric that evening, promising patrons “both the acting and the voice.”