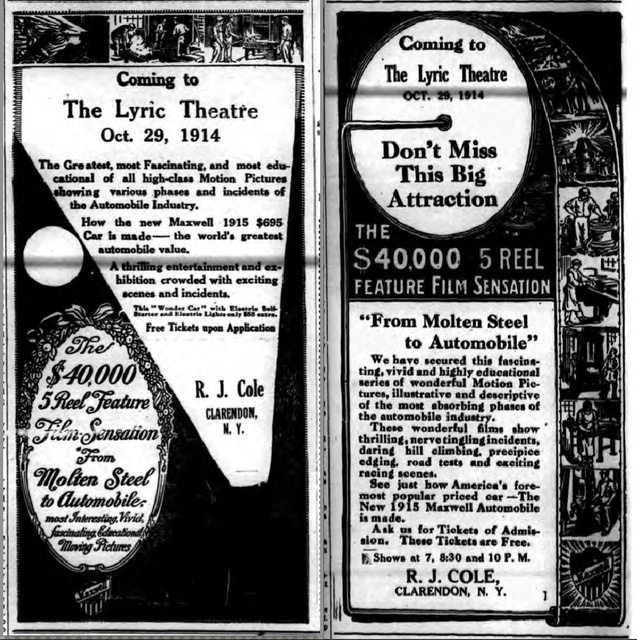 The original Lyric Theatre in Holley, NY, was actually opened as the Orpheum Theatre, out of a converted storefront in the “Fuller block” on the northeast side of the village’s Public Square. It was the first venue in Holley to be opened specifically for the exhibition of moving pictures. The original proprietor was Frank L. Weller, a local photographer for many years, who had run Holley’s first regularly scheduled movie programming at Frisbie & Sawyer’s Opera House, just a block away on the Square’s southeast corner.

Opening night for the Orpheum Theatre was Thursday, October 19, 1911, with a scheduled slate of four reels, including the dramas “Through the Window” and “The Three Brothers,” along with the comedies “The Runaway Leopard” and “The New Cook.” Admission was 10 cents.

According to an article in the weekly Holley Standard, “Mr Weller has made a very pretty little theatre out of the store. A partition across the front provides a pleasant lobby with ticket seller’s booth. The audience enters the theatre by a door at the right of the lobby and passes out by another door at the left. The theatre seats are folding chairs, each row of seats being placed a few inches higher than that in front of it, so that every person has a good view. The compartment in which the picture machine is operated is made of metal and is absolutely fire proof, meeting fully the fire underwriters’ requirements. All other legal provisions for the safety of patrons are complied with, there being in addition to the ordinary front exits an emergency exit at the rear of the audience room, all on the ground floor.”

In the same article, management had promised to deliver nothing but “high class” films that would never offend even the “most fastidious” of patrons, and that the Orpheum Theatre would be as clean physically as it would be morally, further promising that “a lady can wear a white dress there without fear of soiling it.”

On February 22, 1912, the Holley Standard reported the sale of the Orpheum Theatre by Mr. Weller to G. G. Elliott, of Brockport, NY. The news item also noted that the Orpheum Theatre was to open the following Saturday under new management, with four reels of current programming offered every night of the week. By that March, blurbs in the Holley Standard began to appear advertising “New pictures every night at the Lyric Theatre,” suggesting Mr. Elliott had rechristened the theater soon after taking over. A player piano was installed at the Lyric Theatre, as reported on August 7, 1913, and later in the year, advertisements appeared for George Munro, singing “The Weddin’ O’ Sandy MacNab,” one Saturday evening in November. Also appearing by the end of 1913, were larger, block advertisements for moving picture attractions such as the early Italian feature-length epic “Quo Vadis” and entertainments such as “High Class Vaudeville … booked from the Family Theatre and other well known Vaudeville houses in Rochester.” These ads also prominently featured the name of the Lyric’s manager, M. G. Carson.

It is unknown exactly when Mr. Carson’s affiliation with the Lyric Theatre began – or if and when he acquired any ownership interest – but he would continue to operate the theater through the spring of 1915, at which time he would open a new Lyric Theatre, directly across the Square, in a presumably larger converted commercial space, adjacent to Lockwood’s Big Store near the Square’s northwest corner. Carson would also establish an apparently short-lived open-air cinema for the citizens of Holley, in the summer of 1916, supplementing the programming at the Lyric Theatre and offering additional competition to the fare still running at the older (and, likely, less-well-ventilated) Frisbie & Sawyer Opera House.

The store front that once housed the Orpheum/Lyric Theatre still stands today, adjacent to the Odd Fellows Hall. It was last known to be occupied by the Holley Youth Center.

In the street view for this theater, the building that housed the Orpheum/Lyric is the red one, second from left, adjacent to the double-width white building on the corner. That white building is Odd Fellows Hall, constructed in 1890 by the Independent Order of Odd Fellows, a fraternal organization formed in 1819.

When M. G. Carson opened the new Lyric Theatre in 1915, it was in a space directly across the Square, in a mirror-image location that was once again a single width two story structure adjacent to the corner building that was double-width. The site of the new Lyric listed here on CT is shown in its street view to be occupied by Holley Video, and is adjacent to what is now the Community Library.

According to an article in the Holley Standard, on April 8, 1915, a fire had broken out at the bakery located adjacent to the old Lyric Theatre just after midnight the previous Friday evening – the very last weekend before the new Lyric was scheduled to open across the Square. The fire was believed to have started in the cellar of the bakery, which was located in the Odd Fellows block. While the fire was brought under control within an hour, thanks to the quick response of the firemen and excellent water pressure, both the Lyric to the south and the jewelry store to the north were in immediate jeopardy.

No mention in the article as to whether any shows were cancelled at the Lyric. Indeed, while we know that the “New Lyric,” as it was being referred to, opened on Tuesday, April 6, there is no mention in any editions of the Standard during this period as to when operations at the old Lyric were to have wound down, or what plans for the old space were to be.