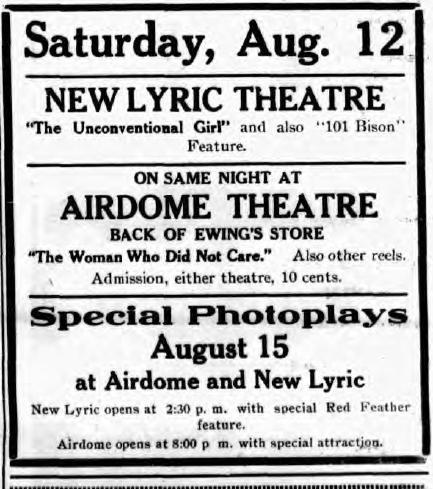 The proprietor of this open-air cinema was M. G. Carson, who first opened the doors to the Airdome Theatre on the evening of Saturday, August 5, 1916. Carson was also the manger at the Lyric Theatre, an indoor venue for screen and stage presentations that was established in the village in October, 1911, out of a converted store front on the Public Square (and later moved across the Square to a second location). Admission to either theater was 10 cents.

The Airdome was erected by Carson in a vacant lot behind Ewing’s Store, according to newspaper accounts and advertisements. Ewing’s was located on the west side of the Square in the Newton block, at the corner of Geddes Street. This would place the Airdome in roughly the same location as the Hollywood Theatre, which would be constructed some years later, in 1923, as the Lyric Theatre’s replacement, and the first, last and only purpose built movie house in Holley.

It couldn’t be determined whether the Airdome lasted any longer than the 1916 season. Only 2 advertisements exist (both from its opening month) in the online images found for the weekly Holley Standard newspaper.